Now, something different, a Greek opera! Actually this is a performance in Greek translation of an originally Italian-language opera by an Ionian composer which incorporates a hybrid (LOVE saying that word!) musical form: although the primary musical language is Italian (Verdi and Mercadante instantly come to mind), the infusion of Greek folk songs and dance melodies will be very apparent. Carrer (1829-1896) was from the island of Zante, which is the second-furthest south of the Ionians. His style was initially strictly Italian (he wrote six operas before Marco Bozzari, including Isabella d’Aspeno which recent scholarly research claims was an influence on Un ballo in Maschera and shares a very similar storyline, all strictly within the middle-Verdi bel canto tradition), but with his seventh opera, he started to incorporate elements of Greek folk-music to produce the already mentioned hybrid for. Translated into the native idiom, the work became very popular with the Greek public and was probably the most popular Greek opera of the 19th century with 45 stagings. His final opera, Marathon-Salamis, was completed around 1888 but was not performed for 115 years until it was mounted by the Greek National Opera in 2003. This last work contains a porto-impressionist idiom and Wagnerian compositional unity, demonstrating a final evolution for the composer.

WARNING: I will admit now that I do not know Greek and I am not even entirely sure what the plot of this opera actually is because I am not working with any documentation about the opera itself (libretto or plot summary). So if anyone actually knows the plot of this opera, please inform me because otherwise I am just going to make things up as I go along here based on what I know of the historical events depicted in the opera and my vast knowledge of 19th century operatic conventions. The setting appears to be in and around Missolonghi, Greece around 1823. There are five characters: Marco Bozzari (tenor) who was an historical Greek freedom fighter during the Greek revolution. He is in love with Sophia (soprano) who is the daughter of Germanos (bass) and who gets kidnapped by Lysandro (baritone) who is really a Turk (?) named Milos, because he threatens to kill her father or something otherwise. Then there is Chrysi (mezzo-soprano), who I think is duenna to Sophia but I really am not sure of any of this and she might be a he for all I know. Marco then dies in the ensuing battle while freeing Sophia from the Turkish camp.

Scene 1: A cave in the mountains near Missoloughi.

7: After around four minutes of orchestral work (especially from the woodwinds, although there is no solid tune and it starts off menacingly like the prelude to an early Verdi opera, Ernani seems to be the primary influence) we come upon the first chorus of Greek warriors (which ends in waltz time and displays various shades of Verdi and Rossini), but the first item of interest is what appears to be an aria using the form of a folk song cavatina from Marco **. This is the first of the Greek-influenced numbers, although the cabaletta is far more Italianate.

Scene 2: A room in the house of Germanos.

18: After a long recitative, Sophia goes into an aria which could have been straight out of Il Trovatore, or any 1840s Verdi opera *. It moves on into a more energetic movement as a chorus of female attendants surround her with news of Marco. Good vigorous military music to the end of the act after the warriors arrive promising victory.

30, 37: Lysandro worries about Greece. The cavatina is only so-so, but the cabaletta has a good grip **. A chorus of Greek warriors arrives with an energetic number as they give him an update. The warriors break into a victory chorus **, finishing off the scene.

Scene 4: Some sort of public scene (I have no libretto).

2: Germanos worries about his daughter and Greece **. A very Verdian daddy aria. It is followed by a very ornery recite, and then finishes well.

10: Sophia comes on worrying about Marco again * in an aria that could have been out of  Il Trovatore. The cabaletta is preceeded by some rousing orchestral effects and is a bit more engaging than the sober cavatina.

15: The furious soprano-baritone encounter duet *** as Lysandro reveals his infatuation with Sophia, begs her to go with him rather than Marco, and when she refuses, he kidnaps her after revealing his identity as Milos and threatening to kill her father Germanos.

24: The act finale **: Chyrsi, Marco, and Germanos come on and realize that Sophia has been kidnapped. The warriors come on and there is good chorusing as Germanos gets Marco to lead them.

0: A chorus of the Turkish soldiers *.

5, 8, 11: Marco arrives in disguise with Germanos and although at first Marco embarks on a rather romantic aria **, it turns into a very energetic duet ***. The second movement is especially militant **. Possibly the best number in the opera.

17: This turns into a grand choral number *** for some reason (Greeks, please tell me what is going on here because musically this is really good!).

0: A beautiful violin intermezzo (obviously based on that of I Lombardi, but rather more beautiful) **.

3: The violin goes right into yet another sobering aria from Chrysi *.

10: An ensemble ** as Chrysi, Marco, and Germanos prepare a surprise attack on the Turks. For some reason there is a climax that just never comes even though the music seems to really be wanting it badly.

16: A chorus as the Turks are lulled into a false sense of security as they are entertained before the Greek attack **.

19: Marco arrives with the surprise attack and frees Sophia but is mortally wounded and dies in her arms. Very standard, if touching, finale **.

Marco Bozzari is what Ernani would be if it went totally Hellenic on everyone. It is the basic love triangle + dad complicated by Greco-Turkish politics from the early 19th century. Just throw in a mezzo in trousers. Basically this is a bel canto-era Italian opera (specifically a Verdi opera) with interesting Greek musical elements. Act three contains the best music, but as a whole it is worth a good look. If I wasn’t guessing about a lot of the plot I would say more. An alpha minus maybe? 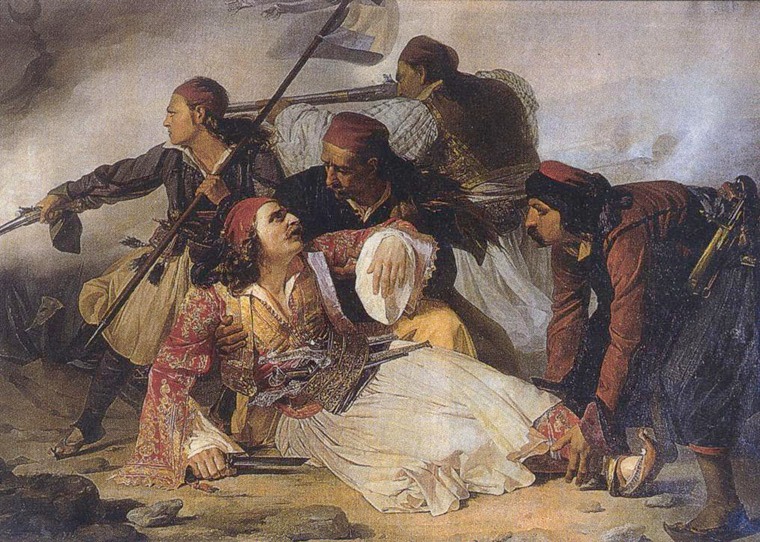