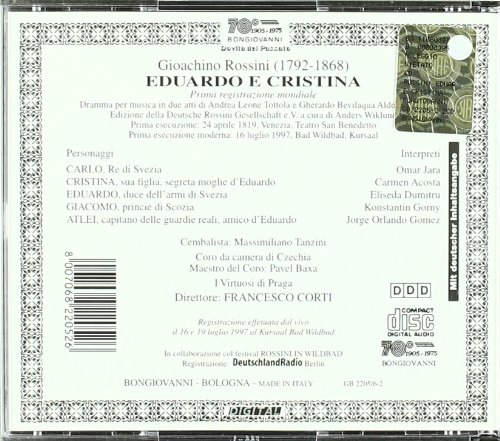 SETTING: Stockholm, Sweden, the distant past although given the reference of a Russian invasion most likely the 1550s . Cristina is the daughter of King Carlo of Sweden. She is secretly married to Eduardo, a military general, although her father wants to marry her off to Prince Giacomo of Scotland. During wedding preparations their little son Gustavo is discovered and his true parentage is revealed leading to the arrest of his parents. Eduardo is freed by Atlei, his friend and a other general and they defeat the Russians during an attempted invasion. With the enemy defeated the grateful king reconciles himself to his daughter’s marriage. Other than Atlei and Giacomo it is easy to tell who is singing because Cristina is a soprano, Eduardo a contralto, and Carlo a tenor. The other two are basses. Those are the only soloist parts.

0: The overture ** is dramatic and heavily Germanic, probably given the Swedish setting of the opera this is a give-in.

Scene 1: The Throne Room in the Royal Palace.

9: The opera proper starts with a etherial Mozartean chorus *. A trio develops between Cristina (forlorn) her father King Carlo (very happy with news of a peace truce) and Giacomo, a Scottish prince to whom Carlo wants to marry Cristina off. The stretta is fine.

19, 22: Another chorus, rather standard opera military *. Eduardo is introduced in a very mild cavatina * which eventually takes on a Barber of Seville-like conclusion. In recitative Eduardo and Atlei greet each other.

36: The long (9 minute) duet ** between Eduardo and Cristina. Eduardo leaves.

46: The chorus ** beckons Cristina to the altar for her bigamist marriage to Giacomo. This is rather good and I think the tune is also the prelude to act 2 of Maometto II although here it is meant to be jovial and not exotic.

49: What follows is an eleven minute long aria * for Carlo. He finds Gustavo peering about and asks who the little boy is. Your grandson, replies his daughter but she refuses at first to reveal who the father of the child is, obviously there must be one.

60, 63, 65, 66: With the finale comes the first totally serious music since the overture **. Cristina gets some good coloratura, the chorus gets a nice bit as well and Carlo ends up taking up his daughter’s coloratura bit as well. Eduardo arrives and a quintet is the result a very good piece **. Carlo spins along in the background as Eduardo admits his parentage of the royal child.

71: Carlo attacks Eduardo and has the two placed under arrest. The stretta * starts off almost the same as that for Maometto II but the chorus is very different and from there it is mostly different. It tries to pull off everything, and it is fine but not great.

0: The chorus is not happy with the recent turn of events and tell us so in unison *.

2: After a brief recitative from Atlei, the second chorus is a little better *, certainly it is more regal.

5: The first substantial number of the act is an aria * for Giacomo in which he declares that he would be more than willing to marry Cristina and even adopt his son has his own.

9: After yet another extremely brief recitative we have a duet * for Cristina and Carlo.

21: Another good chorus ** with a dark introduction.

25: And now a ten minute aria ** for Eduardo. Atlei breaks in and tells Eduardo he can escape and save Sweden from a Russian invasion.

36: After an oboe prelude Cristina comes on in a panic * but she calms quickly, although this is marked as an aria it is really a recitative solo attached the a duet.

44: The duet Cristina-Eduardo ** is more of a aria con coro for Cristina with Eduardo but it ends well.

49: The Battle *, orchestrally depicted as it occurs off stage. A reprise separates the two sections of recitative that immediately follow.

53: The Eduardo-Carlo duet of reconciliation **. Having been successful in repelling the Russians Carlo is okay with Eduardo now.

59: The finale * is mostly taken up by Cristina and the chorus by the end.

This opera was invented in less than a month from bits and pieces of other Rossini operas including Ermione which premiered only a month before and which had been a disaster. It is somewhat hard to understand how the premiere of this opera was so successful. The plot is not particularly interesting and is about Swedes, so how it appealed to Italians is beyond me given the general disinterest for Northern European subjects, and much of the music is pretty humdrum Rossini, although a few of the pieces are some of his upper end ones. If I had a highlight here it would be the overture and the battle. B-.