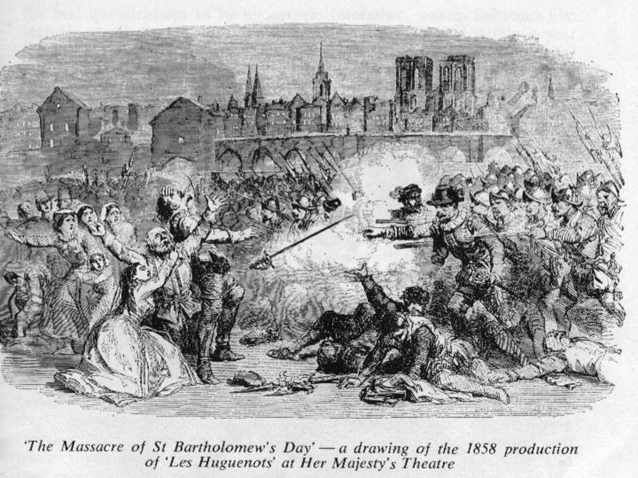 This is possibly the greatest performance of this opera available. It is not however the best recording of this opera by any means but it has such an amazing cast and makes a good introduction for listening to longer, more complete versions of the opera (my other copy was conducted by Diederich and runs a full 80 minutes longer than this and in the original French rather than the Italian of this recording which makes the opera almost feel like it is Verdi. It was also the recording by which I first heard a Meyerbeer opera, and I fell in love instantly with the work and its composer. The cast includes Franco Corelli as Raoul, Joan Sutherland as Margarite de Valois, Giulietta Simionato as Valentine, Fiorenza Cossotto as Urbain, Giorgio Tozzi as Saint-Bris and Nicolai Ghiaurov as Marcel, basically a dream cast.

0: The prelude ** is a series of variations on the Lutheran choral Ein Fest Burg ist unser Gott. Only slightly an odd choice because the Huguenots were Calvinists. It starts off with timpani and then the solemn hymn. It then proceeds into a nice run through with the melody in the lower woodwinds.

5: Nevers is entertaining his guests, although the latter seem to be doing a better job with this rather jovial chorus **. They are somewhat

9: Raoul arrives rather tunefully **. The chorus interrupts him equally melodically to get ready for dinner.

15: Raoul entertains the guests with a romance *** orchestrated to a solo viola d’amore which at the time in which the opera is set was a common instrument. It is one of several period aspects of the music in this opera and in particular this act. This is important to the plot as it describes how he rescued a beautiful woman who he does not know.

24: Marcello, Raoul’s servant, and an even bigger Huguenot, gives us the first of two numbers. First: Ein feste Burg. When asked for another song he gives them an actually period song from the historic siege of La Rochelle **. They respond with ironic laughter.

29: Another chorale *. Not amazing but it is sweet, before Raoul recognizes this mysterious lady that must meet with Nevers as the lady from his song. It is Valentine, the fiancee of Nevers and she must call of her engagement to him at the Queen’s orders.

34: Queen Margarite’s page Urbino arrives with a message for Raoul. His aria is very melodic **, especially for a mezzo-soprano. Raoul then reads the message (royal seal impresses the guests) and he is to go blindfolded with Urbino to his destination.

40: A beguiling ensemble *, it does not seem to know where it is going at first but then Urbino takes over and things get better, but it is all so fast.

ACT 2: The Gardens of the Castle of Queen Margarite at Touraine. (30 minutes)

1: After a brief prelude, Margarite sings her song to the beauties of nature ***.

5: Urbino arrives to tell the Queen that Raoul is about to arrive. The Queen is sure that love will triumph ***. Amazing coloratura but dramatically the Queen will prove too optimistic. Valentine arrives afraid, knowing that in spite of her love for Raoul, her father will never approve because of the religious differences between them.

12: A divertissement: The bathers chorus **, as Urbino spies on them.

14: Raoul arrives believing himself to be dreaming, his duet with Margarite is gorgeous ***. Watch out for Margarite’s coloratura bit about three minutes into this where she will racing about on the coloratura train. It then starts to sound Rossinian but then she comes back to the coloratura as she expounds her plan for peace in the Massif. He is to marry Valentine, daughter of Saint-Bris, and their marriage will act as a symbol of peace between Catholics and Huguenots.

22: The court shows up and Margarite has Valentine’s male relatives present her to Raoul **. More coloratura. Raoul recognizes Valentine and refuses to marry her, she is Nevers’ fiancee.

28: The blow-out ***. Valentine’s relatives are about to kill Raoul, Margarite is trying to maintain the peace at all costs, Valentine is about to pass out from shock, Raoul is enraged that they tried to pass off Nevers’ reject on him and Marcello pounds away at Ein feste Burg.

ACT 3: A street at Pre-aux-Clercs near the church where Valentine has just wed Nevers. (40 minutes)

5: Street scene, chorus on overdrive, first townspeople, then Huguenot soldiers, then Catholic women singing an Marian anthem. Marcello comes on and agitates the populous by attempting to give a message from Raoul to Saint-Bris while he is leading a religious procession. Then there is a gypsy dance *. It’s all okay, but not much stands out or lasts long enough (other than the dance) for it to actually matter. Just a series of local colour pieces albeit most of it rather low voltage. Meyerbeer would mimic this scene at the start of the third act of L’Africaine thirty years later.

14: After some pre-pre massacre plotting by Saint-Bris and Co. (which his daughter overhears) the town-cryer arrives and leads the chorus in a quiet little bit *.

16: In a rather poignant duet ***, Valentine reveals her father’s plot to murder Raoul to Marcello so he can warn his master.

28: The duel ** gets interrupted by polarizing groups of students (Huguenot and Catholic).

32: Marcello bombs out to Ein feste Burg just before the people show up and put an end to the duel, but the peace falls apart rather quickly ** in a scene that feels too close to parody on the part of Wagner in act 2 of Die Meistersinger.

35: Margarite arrives and calls all to order **.

39: A jovial tune can be heard coming from the off-stage orchestra as Never comes to fetch Valentine. There is a new choral tune that soon bursts into this jovial tune as the wedding couple leaves and the Queen follows **.

6: The brief prelude is terribly serious at first. Something bad is about to happen and much of it in recitative, at least at first. Valentine contemplates how terrible her situation is. In love with Raoul but married to Nevers (who is actually a rather kind person), she doesn’t know what to do. Raoul attempts an interview with her before having to hide behind a curtain as Nevers and Saint-Bris arrive with soldiers and three monks ** led first by Saint-Bris with Valentine high above it all, Nevers unwilling to go along with the plot and Raoul overhearing everything. Valentine succeeds in concealing Raoul for all of this.

15: The Blessing of the Swords ***, Nevers refuses to take part and leaves. The climax of this scene is possibly the most amazing thing in music up to 1836.

20: Valentine calls Raoul out of hiding ***. Conflict between duty to warn his fellow Huguenots and safety with the woman who loves him ultimately results in Raoul jumping from Valentine’s balcony into the fray as the massacre. The finale four minutes or so are especially thrilling from the death bell tolling to the end.

ACT 5: (For some reason this is not included in this recording (supposedly because of the bizarre custom of shortening this opera by lopping off the entirety of the five act because of the idiotic claim that it does nothing for the opera dramatically although I have the Opera d’oro release of this performance and it does include it in an abridged 15-minute form attached to the last track which begins with the ending of act 4. The highlights are of course the chorus of Huguenot women in the church, the marriage conducted for the lovers in the graveyard by Marcello as Nevers has apparently been murdered by his fellow Catholics for refusing to join the murder spree, and finally the massacre scene starting with the congregation and then Marcello and the lovers, Saint-Bris discovery that he has murdered his own daughter and the final terrifying chorus of Catholics slaughtering Huguenots in the streets declaring their murder as divine will. As is, and remember it is edited, all *** items.)

This is possibly the greatest opera ever written, and certainly the grandest with the possible except of Verdi’s Don Carlos and yet what is both troubling and amazing about it is just how horrifying the historical event it leads up to was. It starts off very light with a party scene and vague mention of religious tension before the arrival of Marcel with his war song. The seriousness of the opera does not come to a complete maturity until the act 2 finale but then the beginning of act 3 is a light side show of la Parisienne circa 1572 only to return to the serious story with the duet between Valentine and Marcel when from that point on everything falls into place until the curtain falls on the on-stage massacre. The most important thing about this opera is actually not the music, it is the message of the work itself. The plot is a means to an end, a message and warning of the dangers and murderous results of intolerance and how even love is unable to stop the hatred humanity horrifyingly choses sometimes. Raoul and Valentine are controlled by the world around them and their love is not strong enough to stop anything, as is the case in all Meyerbeer operas and to some extent this seems fatalistic, but it is only that way because that is how reality played out, in a different situation people can make the opposite choice and the carnage will not be repeated, or it will be. Meyerbeer’s psychology is very Jewish, not fatalist, humanity is given free choice, and when the wrong choice is made, lives are destroyed. The Queen was right in arranging for Valentine to break her engagement to Nevers, but Raoul chose to reject her thinking she was Nevers’ mistress and the arrangement a cruel joke. This rejection of love leads directly to the massacre as it gives motivation (beyond pre-existing nominal prejudice) to Saint-Bris causing him to murder his own daughter in the carnage when she freely choses to accept love and then die for it. In this way Valentine redeems Raoul’s rejection of her by (albeit briefly) accepting his love. But the die is already cast. I’d also like to mention briefly that I think that Nevers is one of the most interesting characters in this opera and I believe that this is generally if not universally overlooked. His rejection of complying to take part in the massacre of the Huguenots parallels Valentine’s acceptance of Calvinism and her second marriage (after her brief widowhood of several minutes). Both chose love in a situation ruled by hatred and freed themselves from its power, but it cost both of them their lives. And yet, none of these choices should ever be seen as being transacted by individuals, rather everything that happens in Les Huguenots happens in concert with everything else around it so far from being a libertarian/individualist or a fatalist work, Huguenots demonstrates the results of collective choices, for good or for evil and their consequences. That is why it is Les Huguenots and not Le Huguenot. A+.