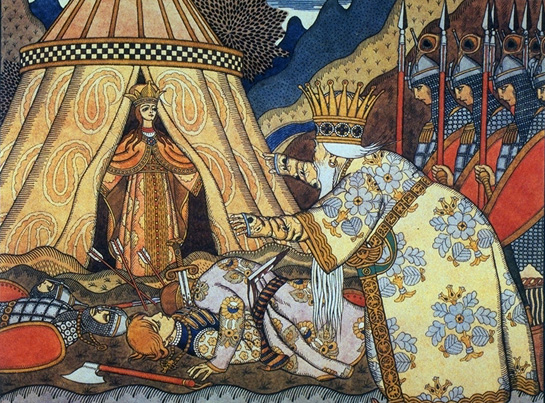 Following the end of composition on The Legend of the Invisible City of Kitezh and the Maiden Fevroniya in 1907, Rimsky-Korsakov had concluded that that would be his last work, operatic or otherwise. However, he decided to write a satire on Russian autocracy and imperialism in the aftermath of the Russo-Japanese War. It was initially received by the censors without changes, then taken back and exorcized; Rimsky-Korsakov considering fleeing to Paris to mount the opera. Based on a tale by Pushkin (of course) this is the long time coming review of The Golden Cockerel.

0: The opera opens with a three-minute long Middle-Eastern sounding prelude ** (preceded by a piercing trumpet call which is a leitmotif for the Golden Cockerel), followed by a brief tenore-contraltino prologue from the Astrologer which is saturated by two themes, that of the Tsaritsa of Shemakha (a chromatic pseudo-Middle Eastern scale) and of himself (a long arpeggio which returns each time he arrives on stage), alluding to the fact that there is a relationship between the two of them as he addresses the audience with the idea that the tale they are about to witness has a moral–somewhere.

4, 14, 18: There really isn’t a highlight in the opening: the leitmotif for Tsar Dodon, who believes that his kingdom is threatened by the territorial ambitions of the Tsaritsa of Shemakha, is a long march tune * which goes on for about three minutes rather well before his son, Prince Gvidon (a rather baritonal tenor), tries to interject, as do General Polkan (bass) and Prince Afron (baritone). Much of it sounds like Boris Godunov for the longest time. It is all agreeably melodic music, but nothing stands out. Only with the arrival of the Astrologer (with his arpeggios) ** who presents Dodon with an egg which transforms into the Golden Cockerel, does anything worth mentioning happen (the Cockerel will sing to essentially the same music throughout the opera in various interjections which forward the plot, and notice that both soloists tend to climax on B-flats, although the Astrologer has a single high D in this passage). Didon tells the astrologer that he can have anything he wants with a tune out of French baroque music *, (this is also an opportunity in the libretto for the Astrologer to ask for this promise in writing, according to the law, to which Dodon responds what law might be if not his own word?) but otherwise, that is it, just very melodious music which could have come from anywhere.

25: Contralto housekeeper Amelfa tucks Dodon into bed with a great lullaby **, which keeps getting interrupted by the calls of the Golden Cockerel, followed by a brief dance and chorus of sleepers and another verse from Amelfa. Two themes, that of the Cockerel and of the Tsaritsa, show up as Dodon slumbers.

36, 44: The Cockerel declares that the Tsaritsa of Shemakha plans to attack, which wakes Dodon who decides to preemptively attack with his sons leading his troops. The sons, who earlier had declared their bravery, whine to get out of it, but fail. Another song for Amelfa **, this time broken up by Dodon, is the most interesting thing as she tries to seduce her employer. The Cockerel keeps going until Dodon goes off to battle as well (the high note is that B-flat again). A good brief chorus ends the act, based on the march tune from the opening of the act *.

3: The early post-battle scene is mostly a rather bloodless (irony intended) affair until Dodon comes upon his two sons (who have slain each other) * accompanied by the wails of his troops. Suddenly, a tent appears through the mist, Dodon and Polkan think it is that of a great general, so they attack it, unsuccessfully.

7: The arrival of the Tsaritsa of Shemakha and her Hymn to the Sun ***, a massive coloratura soprano aria with orientalist pretensions and pizzicato strings.

19, 27: Another amazingly long aria for the Tsaritsa *** as she seduces Dodon with her exoticism. It eventually turns to a very Russian-sounding militant bit, briefly, before returning to the exoticism. She eventually tries to get him to sing and dance with her, to disastrously comedic effect ** (and more chromatic scaling). This eventually starts to feel a little longwinded, and the gear shift is welcomed when it arrives.

38: The great dance  *** of the Tsaritsa, followed by some clunky dancing from Dodon.

44: Dodon proposes; the Tsaritsa accepts. A lovely orchestral passage ensues as she changes to go with Dodon and her chorus of maidens tell us that Dodon is in for it ***.

2: Something is going on with this Golden Cockerel as the curtain rises on a sinister choral scene. Amelfa arrives, prepared as usual, ready with bread and salt for the returning Tsar **.

5: The Wedding Procession itself *** is an extensive choral-ballet sequence, followed by a chorus of rather abused townspeople.

9, 16, 18, 20:  The Astrologer returns ** and demands his reward: the Tsaritsa herself! Dodon refuses, he makes his request again, and again, still Dodon laughs at him, and finally orders his execution, but the soldiers fall. Dodon strikes the Astrologer with his sceptre, killing him ***. The Tsaritsa refuses Dodon, the Cockerel attacks him, pecking him to death on the head. Suddenly there is darkness, the Tsaritsa laughs and vanishes with the Cockerel. The rest of the opera consists of a chorus of townspeople ** and finally the epilogue *** in which the Astrologer tells us that only he and the Tsaritsa were real, the other characters are illusionary.

The irony of the casting of The Golden Cockerel is that although the most amazing music goes to the three female voices and the Astrologer, the central part is in fact Tsar Dodon. Although not all that musically interesting (it is a bass part after all), he literally has to carry the show and is on stage for around ninety percent of the entire opera. The three other male parts are either deliberately boring or too short to really comment upon. The first act is a little dull, if it does introduce all four of the primary leitmotifs of the work: The Cockerel, the Astrologer, the Tsaritsa, and the Tsar, all in rapid succession. Amelfa and the Astrologer save this section from consisting of essentially fine scenario music, but it otherwise lacks individuality. With the arrival of the Tsaritsa of Shemakha, who is a famous example of erotic orientalism in opera (Shemakhi is a city in Azerbaijan), things change, and her contributions (along with the chorus) upgrade the entire situation in the second act. The third act is brief, but from the return of the Astrologer the only thing that can be seen as even remotely boring is Dodon being his usual corny self.

AND NOW A WORD FROM HISTORIAN PHIL M.History: Now, why did I decide to wait three and half years to review this opera? Why did I release it now? This opera is a fairy tale, a great way to get a political message across. We are living, or rather have been living, in a world that has so many problems. There is nothing new about this, and I have no direct solutions, but I do know a good way of criticizing in a non-violent way: theatre, specifically opera, and in particular fairy opera. This work is a blatant criticism of the Tsarist regime in the early 20th century, (Dodon is the inept ruler par excellence). In fact, that was why Rimsky-Korsakov wrote it and had difficulty with getting it staged in Russia. Perhaps this opera can speak to our own times, although the issues are somewhat different. Tsarist Russia had different specific problems than the West (and the world) has today, but in general they are the same problems. Mass incarceration, racial and religious strife and persecution, inept or even malicious government officials, economic inequity, and lack of opportunity, all are common themes. Why can we not all learn that what unites us is greater than what divides us (which is usually economics)? Does this blog not demonstrate that opera itself is a universal art form and a launching pad for the discovery of every culture in the world? All of which are organic, fragile expressions of what it is to be human. Otherwise, I would not be Phil of the Opera World.

And now that I got off my high horse: overall, an alpha.

This is a text widget, which allows you to add text or HTML to your sidebar. You can use them to display text, links, images, HTML, or a combination of these. Edit them in the Widget section of the Customizer.
Loading Comments...
%d bloggers like this: