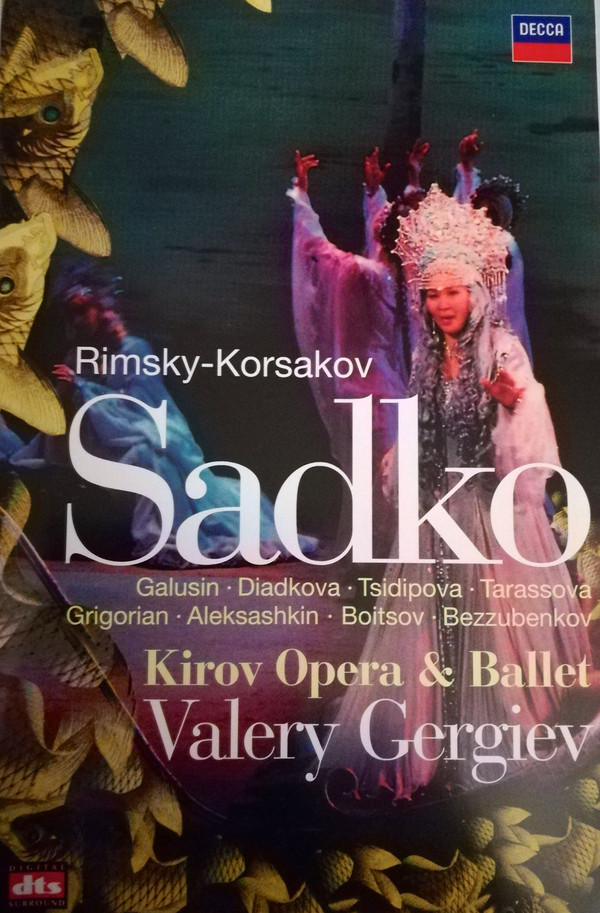 For this review, which is apparently my 300th, I am going to review the opera as if it were in one continuous act of nearly three hours, sort of a Das Rheingold review.

0, 2: Sabralisa my, gosti targovye The prelude *** depicts the eternal waves of the ocean and is taken from a symphonic poem Rimsky-Korsakov wrote around thirty years earlier on the subject of Sadko (it will return in scene five). It flows almost immediately into a chorus of Novgorodian merchants who congratulate themselves on their economic success **.

8: Prasveta svetel masats na nebe The gusla Nezhata is asked to sing and heroic song for the merchants, and obliges with a folk tale about one Volkh which has a firm vocal line for the contralto and a rich orchestration **. It is followed by general Russian male rejoicing chorusing before the arrival of Sadko.

18: Kaby byla un mina zalata Kazna Sadko tells the merchants that he can make the city even richer: if a river flowed from Lake Ilmen to the sea. They laugh at him, but the number has a great nobility to it that it is hard to not take the man seriously ***.

24: V Novegorade velikam The scene ends with a comic number for the clowns Duda and Sopel which distracts the merchants from what Sadko just told them *. Amusing, if a little frivolous.

Scene 2: The shores of Lake Ilmen.

29: Oj ty, tomnaja Dubravushka A grand intermezzo, repeating much of the wave music flows into a beautiful gusla song for Sadko ***. He is disturbed by a rushing sound, and realizes a group of swans has come to the lake.

34: Vyhadite, vy is sina ozera But no, these are not swans, but beautiful maidens (!) led by their princess ** Volkhova, who has been seeking Sadko for him to sing for her.

45, 51: Ya Volkhova! Volkhova states her objectives (she wishes to marry a mortal) *** and Sadko is enraptured by her. She promises him that he will fish three golden fishes which will make him rich and allow him to make his journey. Then she bits him farewell **. The King of the Sea passes by quickly, thankfully. And the scene ends tranquilly with Sadko watching the Swans return to their watery kingdom (some wave references).

Scene 3: An attic in the house of Sadko.

58: Akh znayu ja Lubava misses her Sadko ** in a strong number which really makes one feel for her. It is the sixth hour, and he is not home yet. Finally she sees him coming, but he arrives totally disassociated from her and she despairs.

62: Beli lebedi Sadko fantasizes ** about his encounter with Volkhova and Lubava thinks he has lost his mind talking about swans who turn into beautiful women and golden fish. He leaves, planning on making a great announcement on Holy Cross Day at the port. Lubava prays for God to save both of them.

Scene 4: A pier of Novgorod, on Lake Ilmen.

68: Pasmatrite ka, lyudi volnye The whole town is out celebrating ** and excited about how they have visitors whose languages are unknown to them.

87: Kak na zere na Ilmene Nezhata sings another great song *** about the Sea King and the three fish (somewhat prophetically). Sadko returns with his crew, but where to set sail?

93: A skaly groznye drabatsa The Song of the Varangian **, as forceful as the lyrics are icy. The people say no, fearing Sadko would be killed by the Vikings.

101: Gorat Kammenyj The third, and ultimate, choice, is rather obvious: the Italians (specifically the Venetians). Complete with ballet, it is possibly the best of the three ***.

108: A I v vedettes Slavnjy Sadko makes his choice to go to Venice, but asks that the people take care of his wife while he is away. Lubava arrives in a panic that her husband is about to disappear again on her **.

110: Vysata li Sadko gives his departing song ** (a cappella). With everyone except Lubava cheering him on, it is an oddly sedate and simple end to the scene (and often times the act as well).

Scene 5: On board ship at sea.

114: Ush kak po moru The scene opens with an orchestral reiteration of the waves theme from the prelude (the entire scene consists of this brief section, repeated over and over again) *** flowing directly into a chorus of sailors and Sadko remarking on how he has yet to pay tribute to the Sea King (after twelve years) while his crew throws silver into the ocean. They all cast lots to see who will be thrown into the ocean (Sadko loses) and sings a sad song, having hoped to be reunited with Lubava **.

129, 132, 137, 142: Glup glubokaya, Akian more/Sineje more Grozna/Aj, ne v poru After a watery interlude (complete with harp arpeggios) we finally meet the royal court of the ocean (and a high soprano line from Volkhova) **. Sadko arrives and after being chided by the King, sings a rather lilting song ** which wins over the royals so that Volkhova gets what she wants. The King makes the great announcement. An underwater ballet is performed * which causes the sea to sink many ships (Sadko even gets in on this, providing musical accompaniment). This prompts St. Nicholas of Mozhaysk to condemn Volkhova to become a river flowing from Lake Ilmen, forever as punishment to the Sea King for what has happened **. Volkhova gives her tearful farewell (accompanied by Sadko) as they depart and the kingdom falls. Sadko and Volkhova then travel through to the surface (oddly joyously and triumphal).

Scene 7: Novgorod, a green grove on the shores of Lake Ilmen.

149: Son pa bareshku hadil As Sadko sleeps, Volkhova sings a lullaby to him *** before she goes off to become a river. She disappears (but is not vocally gone yet) as Sadko awakens and Lubava arrives by the river.

157, 162: Ah I zdrastvuj te The Luvava-Sadko reunion duet ** (very catchy melody), is followed by the arrival of the Novgorodians who acclaim Sadko, who in turn sings a song about what has happened **.

167: Slava starchishu The opera ends in a whirlwind chorale to the glory of God ***.

Sadko impressed me in a way that few operas generally do. It is musically brilliant (which is not out of the ordinary, although the tenor lead is particularly good) and the plot is interesting. It also provides some thought into economics, political systems, and physical geography. Throughout the opera there Sadko and others make references to not so much personal prosperity so much as the prosperity of the entire community of Novgorod, which can be interpreted as pseudo-Socialistic. The references to God, although veiled as Christian, can be interpreted as Pantheistic as well. Politically, Novgorod was unique in that it had a semi-democratic form of governance before its territory was incorporated into Muscovy by Ivan III in 1478, although prior to that the city had maintained close ties with the Hanseatic League and Poland-Lithuania.

Musically the opera is gorgeous. The role of Sadko itself is probably the most prized dramatic tenor part in Russian opera. The orchestration is lush (as usual for Rimsky-Korsakov) and utilizes sections of an earlier symphony Rimsky wrote based on the story of Sadko.

This is a text widget, which allows you to add text or HTML to your sidebar. You can use them to display text, links, images, HTML, or a combination of these. Edit them in the Widget section of the Customizer.
Loading Comments...
%d bloggers like this: