Genoveva is a work that must be understood within context, otherwise it makes little sense and will make you want to cut your own wrists out of sheer boredom. Written at the same time Wagner composed Lohengrin, (although no one of less stature than Wagner himself looked at this libretto and told Schumann to abandon it) it is actually a strong claimant for being the first performed through-composed German theatrical work. It is an easy composition to discount: it failed dismally at its premiere, prompting Schumann to never consider a second go, and it has never really gained any sort of following apart from among Schumann enthusiasts, who come off more as apologists than as critical thinkers.

SETTING: Brabant, circa 700. Count Siegfried of Brabant (baritone) goes on crusade with Charles Martel leaving his young bride Genoveva (soprano) in the trust of his servant Golo (tenor) who is secretly in lust with her (and this being a German work, he is also the alter ego of Siegfried, because symbolism). With the help of the witch-servant Margarethe (soprano) he frames the old steward Drago (bass) for adultery with Genoveva, for which the old man is murdered. Genoveva is sentenced to death by her husband, but the truth is revealed by Margarethe (who is warned by a vision of the ghost of Drago that otherwise deathly consequences will befall her personally) before the sentence can be carried out and all ends happily for the couple.

The story is actually based on the real life Duchesse Maria of Bavaria (the daughter of the Duke of Brabant) who was murdered by her husband Louis II of Bavaria on false charges of adultery at the age of 29 in 1256. It is believed that the situation involved two letters written by Maria to two men (her husband and the Earl of Kyburg, a vassal of her husband). The messengers were given the wrong letters and when Louis read the letter intended for Kyburg, thinking it was for him, he supposedly (this part is mostly made up from minstrel songs from the period) rode back home over five days and nights and massacred the entire household including multiple servants as well as decapitated his wife in a psychotic rage. In actuality Maria was tried and sentenced to death. A depiction of which is included below. 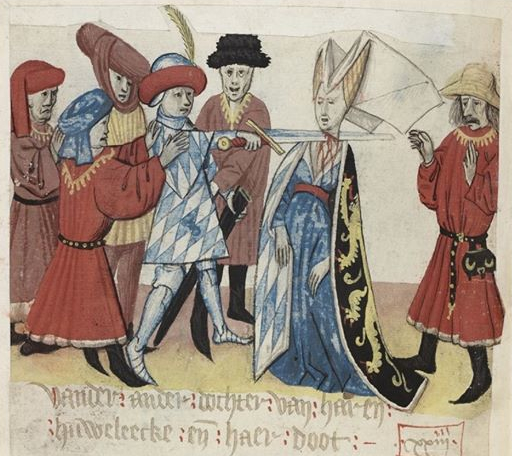 Thankfully German Romanticism turned the above into this: 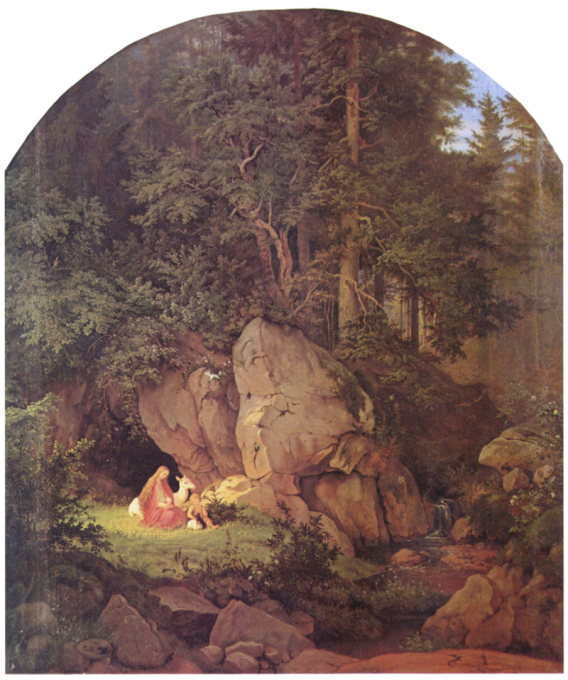 Genoveva in the Wood by Adrian Ludwig Richter, 1841.

If pressed for time, here is an Italian performance from the 1970s.

0: The eight-minute overture * could be taken in one of two ways: Either it is a fragmentary parade of random, rambling, tunes, slow, clunky, and utterly dim, or it is actually an interesting semi-Wagnerian/Weberian exercise. Much could be said of the rest of the work in this same vein. I suggest that if you are listening on a video that can be sped up to speed it up as it will sound more energetic.

8: Erhebet Herz und Hände The opening chorus is pleasant enough *, sort of the German Catholic version of the opening of Meistersinger (doesn’t that sound Medieval and Romantic?).

11: Wir sind bereit Hidulfus leads the people in a prayer **. This actually is good.

20: So Wenig Monden Erst Siegfried and Genoveva say goodbye in the most jovial way *. It is bloodless, with no sense of the spouses knowing that they are parting for a long time.

25: Auf, Auf, in das Feld Siegfried entrusts Genoveva to Golo (a chord in the brass, which returns frequently and I will call the brassy chord of doom, tells us that this is a bad idea) and departs to a brassy chorus *.

30: Sieh da, welch feiner Rittersmann Margarethe comes on to the most bizarre number *, it is straight out of operetta or the witch in Hansel und Gretel. The remainder of the act consists of her and Golo conspiring to ruin Genoveva (brassy chord of doom). The entire scene is dramatically out of place, it is pure comic filler, and gives more of the impression that Schumann really had no clue what he was doing writing this.

0: O weh des Schneidens Genoveva is alone and contemplates * (brassy chord of doom returns and comes up frequently). A strange male chorus is heard outside. Golo comes on and doleful recitative ensues.

8: Wenn ich ein Voglein war Golo reveals his sinful lust for Genoveva and she rejects him in a rather good duet ** (she even calls him a dishonourable bastard, literally that is the libretto not me!). He slinks away after that and argues with Drago. Margarethe plots with Golo to frame Drago into an adulterous affair with Genoveva.

19: O du, der über alle wacht Genoveva prepares for bed to an okay little number *. The vocal line is sturdy but the orchestral accompaniment is cluttered.

23: Sacht! Sacht! Aufgemacht! The act finale **: servants come in to the bedroom egged on by Golo. Drago is discovered and killed. The last three minutes involves some stronger drama than earlier. It is marred by a patch of raging from Margarethe.

0: Nichts halt mich mehr The act opens with a weird comic scene * in which Margarethe tends the wounded Siegfried. The orchestra is unusually all over the place.

3: Ja, wart du bis zum Siegfried has a surprisingly good aria about hunting **. Golo arrives and fills Siegfried in on how Genoveva got caught with Drago and asks what he wants to have done to the woman. Siegfried is very quick to condemn his wife.

13: Ich sah ein Kind im traum Margarethe, who has never been musically interesting, embarks on a horrid magic act in which she conjures up images of Genoveva committing adultery in a mirror *. Why is this happening?

19, 25: Erscheint!/O Gott! The chorus ends up getting involved in the deception *. Eventually the two men leave for the castle, a Gong sounds and the ghost of Drago appears before Margarethe with a dreadful warning ** (amid trumpet fanfare): unless she reveals the truth to Siegfried and saves Genoveva, she (Margarethe) will be burned at the stake. She runs off trying to find Siegfried and the act ends without any rational musical conclusion or battery chords.

0, 5: Steile und Steiler/Die letzte Hoffnung schwindet Genoveva is brought to the forest by two knights names Caspar and Balthasar (baritone and bass respectively) to be quickly dispatched for adultery *. She prays, this at least is rather lovely ***. This is the best number by far.

11: Kennt ihr den Ring Golo realizes that his rouse has gotten very much out of hand *.

16: Weib, heuchelt nicht Genoveva tries desperately to find a way to stall her execution **.   Siegfried arrives having been told everything by Margarethe and saves Genoveva in the most sedate way.

20: O laß es ruhn Siegfried and Genoveva sing a weirdly happy duet for a couple that has just been on the brink *. One would not expect Genoveva to be so okay with Siegfried given the circumstances.

23: Bestreut den Weg A mild chorus as the scene changes and the Bishop returns *.

27: Seid mir gegrüßt The finale * is jubilant, but also somewhat hollow and a little too fantastic.

The immediately obvious problem with Genoveva (from the first bar) is the poor orchestration (the flutes are awkwardly overused, the strings are frequently arranged incorrectly) and how slow the tempo of that orchestra is. In 1995 it was given eight performances in Bielefeld, Germany under Canadian conductor Geoffrey Moull (who vigorously conducted the piece more quickly than anyone before had bothered) and these were greeted with a level of enthusiasm the work had never see before or since. Is perhaps conducting speed to blame for why every other performance of this work has been meet with ennui and derision? Well, thanks to modern methods (like 1.25x speed on YouTube) the music can be sped up on otherwise ordinarily conducted performances and I have found three things: one, the music never sounds rushed from doing this, two, it sounds better, and three, the work is shorter by almost a half an hour as a result. So a win-win! There is also the problem that the score strongly demonstrates that Schumann had no clue what he was doing writing a stage work.

The less so obvious problem is that there is no actual plot: the story is completely preoccupied with only a single situation: a husband is on (proto-)crusade while his wife is accused falsely by a lustful servant of adultery. Murder and mayhem ensue. Apart from Margarethe revealing the truth in time to provide a happier ending there is nothing else here. There is also very little of Genoveva herself prior to the fourth act, and very little in the plot to hold interest. The ending is also rather unbelievable: why is Genoveva so willing to overlook the fact that her husband has just hours earlier ordered for her to be executed without trial? On a plus side, Golo is a tenor, which makes him slightly more bearable as the villain given that he is on stage more frequently than any of the other soloists.

I first heard Genoveva just out of curiosity about five years ago, and apart from the second act finale I remember being bored half to death by it, and was quick to condemn it to the same mediocre German musical hell as Euryanthe. It isn’t long (in fact there are Italian performances of it up on YouTube which are less than 2 hours), but it is slow nevertheless. It survives on the fringes of the repertoire mostly out of respect to Schumann than from any public support base it might have (it has none, ironic sigh, unless you frequent TalkClassical in which case all things German are mindlessly idolized in a neo-Fascist circle-jerk).

The unfortunate thing about Genoveva is that if it didn’t exist, and Schumann had heeded the wise warning of Wagner (I will never say that again!), it really wouldn’t matter at all to the history of music. It is a work that exists, and so we must put up with its existence even if the fact of its existence is annoying, like Capitalism or Donald Trump, rather than being either any good or actually bad. Schumann has imposed this thing upon us by his free will and now we must endure the product of his choice forever.

This is a hard nut to crack. My first instinct is that it is both simultaneously poorly executed dreck and needs to be given allowances. It isn’t terrible, but it is hardly good either, nor am I completely convinced that it is, in fact, an opera (note that this is the first time I used the word in this post), but rather more of a choral oratorio with soloists, sort of a mix of lied and the Ninth Symphony, but with a vague scenario about a saintly medieval noblewoman.