Just an FYI for those of you paying attention before the review: I successfully defended my MA thesis in history a little over a week ago and will be graduating in November. Thank you. 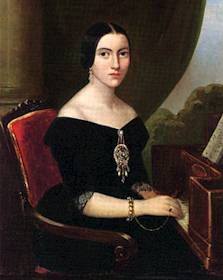 This opera was written, not surprisingly, as a vehicle for soprano Giuseppina Strepponi, the future wife of Giuseppe Verdi. The libretto is taken (at least in the first two acts) from an 1834 opera entitled La figlia dell’arciere set by Carlo Coccia. The Donizetti opera consists of an overture and nine musical numbers. The video is at the end of the review.

SETTING: The Court of Burgundy, 14th Century. Adelia (soprano) is the daughter of Arnoldo (bass) the commandant of archers in the army of Carlo of Burgundy (baritone). Yes, the same Charles of Burgundy from Carlo di Borgogna. Anyway, this Charles is a really meany, and is enforcing a strict law about nobles not marrying commoners. This is problematic because Adelia (a commoner) is in love with Oliviero (a tenor nobleman) and Charles has sworn that if Oliviero were to marry Adelia, he will then have Oliviero executed. It also doesn’t help that Arnoldo (in act one) doesn’t like Oliviero after discovering him in his daughter’s bedchamber. When her father realizes that the two really are in love, he pleads with Charles to allow them to marry in spite of the law, which prompts Adelia to postpone the wedding to save Oliviero from execution, and for her to go temporarily insane (this is common among Donizetti heroines). Fun stuff this opera reviewing!

ACT 1: A public square in the Burgundian capital leading to many roads. (53 minutes)

0: If you didn’t know, you would think that this is the overture to a comic opera with a military theme *. A charming, if mild and rather standard, piece. Watch out for elements of Rossini.

6: Dalla torre ascoltate la squilla The Burgundians celebrate their recent military triumphs joyously **. It goes into a slower section (almost the sort of patter chorus one would later expect of Verdi), followed by a regal (if low key) march.

16: Arnoldo comes on and goes into the situation: finding Oliviero in the bedroom with Adelia, wanting to kill him etc. moving into a sober (and paternal) cavatina * with a butterscotch tune. It turns to a fiery cabaletta of vengeance.

24: Fui presaga; ah! tu lo vedi After an angry choral passage from her ladies in waiting, Adelia gets her first big solo *. A standard, solid number.

32, 39, 43, 47, 50: Amo, ed amata io sono Act finale **: Adelia admits her love for Oliviero and pleads with her father to help her. After this gets straightened out rather quickly, Donizetti reuses a choral sequence as Carlo arrives *. Arnoldo pleads with Charles to pardon Oliviero (who shows up somewhat randomly at this point).  Oliviero makes another impassioned tenorial plea *, which is followed by a similar bit by Adelia. The stretta is slow * but builds well to a fast climax to end the act as Carlo consents to the wedding and everyone embarks on operatic rejoicing **.

0: Scegli. Di perle candide Adelia prepares for her wedding with a charming chorus from her ladies **.

25, 33, 38: Sollevar la fronte ardisci? Comino, the tenor confidant of the Duke, arrives with an execution order for Oliviero which he hands to Odetta (the lady to Adelia). The information is relayed to Adelia who is horrified. Arnoldo arrives, chaos ensues and Adelia goes nuts and starts thinking she sees her dead mum. For around four minutes, the music has a Verdi-esque quality to it that is striking **. Eventually it turns into a trio as Oliviero returns **. The bridal chorus is eventually heard outside, but Oliviero embarks on an mini-aria. An act ending from another Donizetti opera (Roberto Devereux, Anna Bolena, ?) is modified for the finale to this act **.

0: Sul campo dell’onor An amusing male choral number starts the act *. More of an entr’acte than anything else, but worth looking out for.

Scene 2: A great hall in the palace.

5: M’ingannò la mia speranza Oliviero, who up to this point has been on stage around 30 minutes in the last 100, gets a gentle aria ** taken from Gabriella di Vergy. Comino arrives and informs him on execution plans.

14: Ciel tu de’ barbari The 12-minute finale: Adelia bombs out **. Donizetti brings on the flutes as our soprano soars about. In the last four minutes there is a sudden reversal of fortune: the Duke has ennobled Arnoldo, so now Adelia is retroactively rendered a noblewoman and can marry Oliviero without execution. General rejoicing.

Adelia shows all the signs of being a rushed star-vehicle. The plot is thin even for its two hour running time, yet it provides the prima donna with no less than three massive arias and an opportunity to go stereotypically insane. There are seven soloists, yet only the primi tenore and basso get a single aria each. The five arias and the ensembles are very good. Written at the same time that Donizetti was preparing La Favourite and La fille du Regiment, there is quite a lot of borrowed music, yet the score is nevertheless enjoyable at the very least. Nothing is amazing to the level of Lucia di Lammermoor, but it is hardly Sancia di Castiglia either! The libretto is weak, the ending rather unbelievably convenient, and the characters are pseudo-medieval cardboard cut-outs, but the music might be enough to salvage the night. A beta.