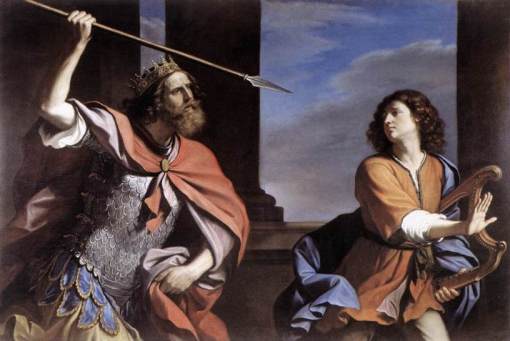 Did anyone notice that I was (mostly) gone for a month? (I did revise my review of Dimitrij by Antonin Dvorak a few days ago if anyone is interested). This is the first published (but not first written) of a new series on operas on themes of prejudice in various forms.

Due to the fact that my blog was recently attacked by Neo-Nazi scum, I have decided to write fewer but better reviews and there will probably be only around two dozen reviews this year. Today is also Holocaust Remembrance Day so I decided to do an opera on a Biblical theme by the most famous composer of Denmark, a country I have both completely ignored up to this point and which famously saved almost all of its uniquely and somewhat famously well integrated Jewish population during the Holocaust. I was going to release a different Danish-language opera (which will appear soon as it has been ready for release for weeks) but I thought that in this time of nationalistic and racialist violence, a work by a Nordic composer, Carl Nielsen, which is on a Jewish theme, and what is more by a composer whose religious hymns reinvigorated the Danish population when they were subjugated by the Nazis (so yes, actual Nordic people could be enslaved by white racists as well), would make for a thought provoking post. I plan on releasing Maskarade in December so this makes a good frame for the year.

Carl Nielsen is a composer whom I have sorely neglected. He wrote two operas, but is far better known as a writer of symphonies. His two forays into the genre have proven successful (at the very least in Denmark) whose books of collected Danish hymns became  a solace for the occupied Danes a decade after his death.

0: Kommer han? The opening scene ** as Saul, his son Jonathan, and the priests await the long anticipated arrival of Samuel (after seven solid days!) in order to perform the sacrifice to G-d for victory over the Philistines (who are fast approaching with thirty thousand men, including six thousand on horseback) frantically runs its course. Saul decides to take matters into his own hands and perform the sacrifice himself which causes to Jonathan to run away begging the Almighty to strike him down instead of his father. The female voices of the chorus finally appear for the first time to declare that the blood of the sacrifice is lifting their prayers to heaven.

7: Mod Dig, o Saul! The arrival of Samuel * could be much more dramatic and although it is frightening, it could be even more so. The prophet declares that G-d has taken the throne from Saul for his lack of patience and his disobedience.

14: Kong Saul, min Fader!  Jonathan tries to persuade his father that G-d is merciful **. Abner, the captain of the guard, arrives with news, but Jonathan tells him the King is ill.

16: Kunde jeg rejse mig Alone, Saul declares that he and G-d are enemies constantly fighting each other **.

20: Jeg kommer fra Bethlehems Dale David’s first sweet words *. Not all that original, unlike Saul’s music, but very lyrical nevertheless. He sings for Saul in an attempt to calm him and it attracts the attention of Saul’s daughter Mikal. The entire family (he has sung at the urging of Jonathan) beg him to stay in the palace. Saul is called to battle and leaves, Jonathan as well.

28: Jeg har seet Dig engang for idag The remainder of the act consists of a duet for David and Mikal in which they declare their love for each other *.

5: Kongen! hvor er han? A well crafted opening scene ** as Abner (Saul’s captain of the guard) interrupts David’s singing to announce that the Philistines are storming the gates of Jerusalem. Mikal arrives and declares only woe for the Israelites. Saul offers her hand to any man who can defeat the enemy and David offers to defeat the Philistines and lead the Israelites to victory. Mikal tries to stop him, or rather have her father stop him, but to no avail.

13: Saae I hom, Piger Left alone with her maidens, Mikal has the Jewish equivalent of a “long day’s journey into night” as she expresses her love for David (her husband) and a rather graphic depiction of him dying at the hand of the Philistines **.

19: Sejer for Israel ved Davids Haand! But Jonathan arrives and declares to his sister that her husband has been victorious *.

24: Frydesang! Paukeklang! During the second, longer chorus ** which depicts the marriage of David and Mikal, Saul rapidly because jealous of David’s popularity with the Israelites and Saul demands that he sing.

28: Herre, jeg gaaer i din Forgaard David’s last and rather sad song for Saul * before the king explodes on him and David vows that they will meet again.

0: Yet another prelude **, this time depicting the night. It gets broken up rather early (two minutes) by the arrival of Jonathan and Mikal.

2: Se Natten, Mikal At first they express wonder at the beauty of the night, but Mikal’s thoughts quickly turn to her beloved David *.

7: Seer Du? David and his companion Abishai come upon the encampment * and David, wishing for a reconciliation with his father-in-law, steals his helmet and spear, but does not physically harm him.

10: Abner! David wakes up Saul’s camp and there is a reconciliation between the two men *.

15: Herren er Vidne! The reconciliation chorus * as David is reunited with Mikal. Abishai breaks up everything announcing that the dying Samuel is coming their way.

20: Hvor er jeg? Samuel arrives and ruins everything by declaring that the Almighty has ordered him to anoint David **. Samuel dies after performing the ritual.

28: Ja, han et dod! Saul’s jealousy instantly flares up again, but this time Mikal refuses to be parted with David and goes with him in defiance of her father **.

Scene 1: The layer of the Witch of Endor.

4: Hvem der? Saul calls upon the Witch to summon * the ghost of Samuel so he can finally ascertain some answers (as no one else has bothered answering his prayers for relief from the Philistines).

9: Saul! hvi lofter Du The apparition of Samuel **, who tells Saul nothing other than that he and his sons will die by the Philistines for summoning him (although wouldn’t it have happened anyways?).

12: The Interlude depicting the battle of the Israelites against the Philistines ***.

Scene 2: The battle field at Gilboa.

16: Er Slaget forbi? Jonathan has been mortally wounded, his brothers already slain, and is being watched by Abner as King Saul arrives bloodied but not mortally begging Samuel for the relief of death *.

19: Se, hvor graadigt Jorden Saul at first begs Abner to kill him, but he refuses and Saul, in one last act of defiance against the deity who so apparently hates him, commits suicide by stabbing himself **.

23: Abner! svar, et det Dig? The finale ***. David arrives with Mikal and are led by Abner to the bodies of Saul and Jonathan. David then leads a mourning hymn for them but it rapidly turns to joy from the people acclaiming their new monarch. Curtain.

Saul og David is a Biblical epic, most of the events occurring in the latter part of the First and the very beginning of the Second Books of Samuel (or Kingdoms for my Eastern Orthodox friends). The best of the characterizations is Saul. David is more traditionally drawn both musically and dramatically whereas the older king is psychologically far more interesting: one starts to actually take his side in the apparent disowning the Almighty has inflicted upon him. David is a good character, and he ends up getting the best number in the opera, but his is far closer to a traditional operatic hero. Jonathan is a good but rather passive fellow (his musical references have an intriguingly Classical feel). Mikal ends up contributing far more to both the plot and the musical situation even if her music with David is just standard fair. Critical reviews in 1902 considered that this was really more of a oratorio with a symphonic treatment than an opera in the traditional sense, although everyone agrees that the composition is masterly. This is rather accurate as the dramatic elements are mostly relaid by the orchestra, sometimes by the chorus, and only rarely by the soloists who generally provide only a personal touch to the narrative by expressing their feelings about something (Saul’s agitation at Samuel’s tardiness, his jealously of David after the latter slays Goliath, Mikal’s love-sickness for David). Incidentally, the first performance in the United Kingdom presented the opera as a oratorio. Another general consensus is that the most dramatically interesting moments in the opera (usually but not always the choral sequences) are separated by long drowning out moments of inaction (I assume this means the various monologues and dialogues in which the soloists express themselves and forward the plot). The various orchestral preludes and interludes in the last three acts are big highlights, as is Nielsen’s usage of the chorus, which I think I can say from consensus he pulled off better than his soloists (Saul and maybe Samuel being the exception). This is not to say that the other soloist parts are bad, hardly, but they lack individuality and distinctiveness, they just seem like biblical characters as stage tropes. Overall an A-, maybe a solid A.