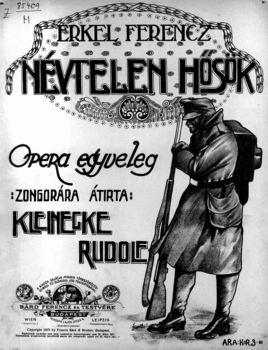 Okay, so after three tragedies in a row, we need some comedy and thankfully Erkel wrote two! It is still on an historical subject (pretty much all of Erkel’s operas are either historical or pseudo-history), this time it is set during the Hungarian Revolution of 1848. This is from Erkel’s very late period, he would only produce one other opera after this, Istvan Kiraly about King Stephen I of Hungary. Erkel’s last four operas were produced not just by him but in partnership with four of his sons. At first his sons would simply contribute orchestrations of piano-vocal scoring already written by their father (as was the case with the operas which immediately followed Bank Ban, the comedy Sarolta and the Grand Opera Dosza Gyorgy), but eventually they ended up writing entire numbers, resulting in music of variant quality and success with the public. The quality and popularity of Erkel’s later works declined and his last five operas (excluding Brankovics Gyorgy which was mildly successful but nothing like Erkel’s first three operas) did not attain a popular following and several have only ever been performed at the Budapest Opera House, and nowhere else. Since there isn’t a different version of this opera available, I am going to assume that this is an operetta (this television film adaptation includes dialogue, whether or not the opera properly does, I do not know).

SETTING: An Hungarian market town and an army camp, during the 1848 Hungarian Revolution. From what I can surmise (since I’m working with Hungarian materials translated electronically into English, which is to say, not all that great), the story is about Ilonka, the daughter of the widowed innkeeper Saskane (the name means “snail” apparently in Hungarian), who is in love with a clerk named Elek Andorfi although her mother has promised her to the cowardly Tamas Csipkes. Both the town pastor Parasitny and Elek’s employer Peter Derek want to help the young couple. When army recruiters arrive in the town Elek enlists, but Tamas does not. Eventually Ilonka’s poor treatment by her mother in the absence of Elek, and her refusal to marry Tamas leads her to run away with a soldier named Mosi when his regiment is billeted in Saskane’s inn. Although she is reunited with Elek at an army camp, Ilonka is wounded and captured during an attack on the camp by Hapsburg forces. Saskane realizes that she can’t keep the inn running without Ilonka but when it is discovered that she is a woman she is released and reunited again with Elek. In celebration, everyone forgives each other.

2: The prelude is a quiet piece of introductory music which sets us for something rather solemn. The Ilonka-Elek love duet that follows * as they are spied on by Tamas Csipkes is full of sweet nothings for the oblivious lovers.

8: The recruiting officer arrives * and their pitch turns into a nationalist hymn.

11: Pastor Parasitny’s prayer * equally turns into a militant nationalist hymn as about half of the men in the town enlist and say good bye to the womenfolk.

16: Elek enlists, which Ilonka is obviously not thrilled about (also why exactly he enlists is rather unintelligible), but it does spark a very good duet full of pathos **.

18: The act finale * as the men go off to war and the women see them off with a good dance-off.

6: Mosi, an officer in the Hungarian army who loves Ilonka like a sister, tries to entice Ilonka into going with him disguised as a boy so she can leave home and find Elek. They embark on a trippingly catchy duet **. Mosi does this with the pretext of pretending to be helping Tamas win over Ilonka.

9: A regiment of soldiers arrive at Saskane’s inn seeking lodgings *. Ilonka waters the soldiers while her mother is infuriated because she has no idea what to do with so many men.

14: At night, Ilonka meets with Mosi in the woods accompanied by her brother. This trio is rather amazing as they try to be quiet **.

18: A charming choral-dance sequence ** as Tamas thinks he is about to marry Ilonka and the girls trick him dancing about and amusing themselves. Saskane realizes that Ilonka has run away and tells Tamas as the girls laugh and sing.

4: Elek thinks longingly about Ilonka ** in a good tenor aria. Ilonka arrives and is reunited with Elek thanks to Mosi.

10, 17: Ilonka “enlists” in the Hungarian army (or no air quotes for feminist interpretation although technically her enlistment isn’t legal) in a good ensemble number with the chorus **. It is revealed that the troops have a cannon. Parasitny marries Ilonka and Elek. They all drink a toast to the newly-weds, but the joy is short-lived as a scout runs on telling them that the Hapsburg troops are on to them. Elek tells Ilonka not to go into battle but she really wants to. They encounter the the Austrians in a climactic battle ** and Ilonka ends up getting hit.

3: Elek is left to prayer for Ilonka to come back to him **. Notice the verbunkos usage in the violin at the end.

7: Saskane is infuriated that she has lost her daughter to the Austrians and goes to pray in the church **.

10: Mosi arrives and tells Elek that Ilonka is being released by the Austrians and he can go to fetch her. He takes Mosi’s horse (which is weird seeing that in the next scene he is obviously taking Ilonka home in a cart. Their duet, however, is very lovely **.

15: The opera ends with a two-minute choral-dance off ** as the town celebrates the wedding of Elek and Ilonka. A rather good way to end a Hungarian comic opera.

This is a nice, sort of nationalistic, romantic comedy. None of the music is overwhelmingly great, but most of it is really very good. The first quarter hour is slow as the scenario gets set up, but otherwise the plot moves quickly to a happy conclusion. It really can’t be an alpha because it is much too slight and predictable, but certainly an enjoyable and entertaining B+.