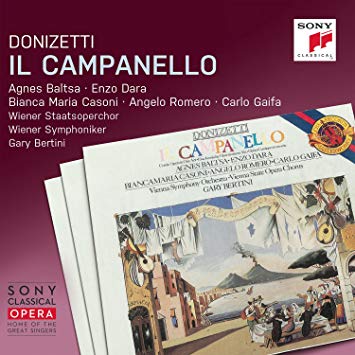 This is based on a French vaudeville entitled La sonnette de la nuit. It was performed sporadically from its Naples premiere until the early 1880s (including performances in London, Philadelphia, and New York), then disappeared until after the Second World War when it has had something of a second life as a comic short on the fringes of the rep of many Italian houses as well as the odd performance in Germany and Austria.

SETTING: Naples, early 19th century. Apothecary Don Annibale (bass) has just married Serafina (soprano) and her cousin, and former lover, Enrico (baritone) is determined to make sure the marriage remains unconsummated so he disguises himself as a series of customers for Don Annibale and keeps him up all night so that he has to leave the next morning for Rome without ever getting to bed.

Scene: A grand room in the house of the Neapolitan Apothecary Don Annibale Pistacchio.

2, 11: Bella cosa amici cari The opera starts with chords that resemble the start of the violin concerto in Verdi’s I Lombardi interrupted by the persistent ringing of a bell (foreshadowing). After a typical opening ‘evviva‘ chorus the first item of interest is a comedically furious aria ** for Don Annibale as he thanks the wedding guests and is about to prepare for the wedding night.  He discusses with Serafina’s aunt Rosa (contralto) that he must consummate the marriage that night or otherwise it will not happen for a very long time because he has to go on a trip to Rome to sort out the will of an Aunt who lives there. Annibale’s servant Spiridione (tenor) announces the arrival of Enrico, his wife’s cousin. Annibale and Rosa go off-stage dancing a mild gallop *.

12: Non fuggir, t‘arresta, ingrata! Enrico arrives and tells Serafina how terrified he is about the possibility of her marriage to Annibale being consummated in a nice duet **. Serafina is apparently on board with this because if un-consummated that night, the marriage can be easily annulled. The reason for her willingness to be separated from the doctor is that she really is in love with Enrico.

35: Ho una bella, un’infedele After Annibale expresses exhaustion Enrico arrives in three separate guises ** (a sick Frenchman, a sick singer who is apparently a tenor (?), and a blind man looking for a cure all for his “wife”).

46: Mio signore venerato This last man sings a very complicated baritone aria ** because it requires so many sixteenth notes.

51: Da me lungi ancor vivendo The finale ** in which Enrico successes in preserving Serafina’s virginity and Annibale is off to Rome as executor of his aunt’s will.

Ignoring the rather weird plot (well sort of weird today because of the idea of cousins being lovers which wasn’t as odd in the 19th century, also the fact that Serafina is upset about landing a doctor which makes no sense in today’s world, however, we are not in today’s world here but rather the early 19th century when such things made sense), musically this opera is just fine, everything is very good, nothing amazing, but also nothing dull and it is consistently enjoyable. Also, I sort of wished Enrico was a tenor, but that is just my personal bias. Making the role a baritone actually allows for him to be on stage for longer periods without exhausting (although see Pigmalione below). The only thing I can really fault it for is that it doesn’t make a very lasting impression, even though it is good. B+ or A-.

I got tenor deprived in the last opera so here is an opera that is basically a gigantic thirty minute tenor aria with a brief duet with a soprano (she has 13 lines). This was Donizetti’s first opera, written as a 19 year old student. It relates the Greek myth of Pigmalione, King of Cyprus, who fell in love with his sculpture of a non-existent woman, Galatea, which was rendered living by Venus.

0: The prelude *** is beautifully serious and flows immediately into a recitative for Pigmalione in which he mourns that he can not give his sculpture life.

4: Voi che intorno a me vi state Now a long tenor aria *** as Pigmalione looks upon all of his statues which includes a brief similarity to something in L’elisir d’amore.

12, 15: Venere istessa a te ceda in beltà!/Ah che veggo! Ciel che sento! Pigmalione declares that his statue would make Venus bow because of its beauty. He is totally in love with this statue ** and goes into a loverly passage.

20, 22: Da smania e furore/Voi che lo stato mio After a delicate quite passage there is a bit of angst ** and then more subtly *** as he wants to die, but also feels envigored by the Furies.

26: Ciel pietoso, ciel clemente Pigmalione declares to heaven that he would die for his statue **.

29: Numi che veggo Suddenly the statue (which he has named Galatea) starts to develop a pink pallor *.

32: Io Galatea’s first word “Io” as she comes to life and Pigmalione  is surprised and a little terrified **. She eventually asks him who she is. He declares that she is the product of his heart and the gods. He trembles, she asks him for his hand as she dismounts her pedestal. They embark on a brief duettino (repeated at the end of the opera).

35: Ah senti mio bene The final duet ***, he declares he loves her, she asks him what love is, apparently a merciful deity who has given her life. They delight in love and happiness.

I’m not sure just how to interpret this. Pigmalione can be seen as a celebration of heterosexual romantic love, the self-love of an artist, or just love in general. Musically it is just delightful with a massive half-hour long tenor aria that is as gentle and clear as anything Mozart ever wrote followed by a brief six minute duet with the soprano statue. What makes it so much more amazing is that it was Donizetti’s first attempt at writing an opera and although very simple, it has a distinctive sound world and charm that is all its own. A mini-alpha.