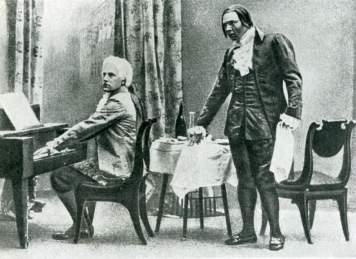 This performance, performed by the Arctic Philharmonic, is apparently sung in Norwegian.

SETTING: Vienna, 1791. The talented Salieri (baritone) is jealous of the genius Mozart (tenor) and poisons him when they dine at an inn.

0: The opening scene with its prelude and monologue for Salieri is really quite lovely **.

8, 10, 14: Mozart arrives to what seem like random quotations from Mozart operas **. A blind fiddler tries to play an aria from Don Giovanni * which amuses Mozart but apparently infuriates Salieri. Mozart then goes into a long monologue about a piece. A piano player then plays **, the orchestra crashes, but eventually provides a find accompaniment.

19, 22: Salieri is left alone to contemplate poisoning Mozart * to a most placid accompaniment.

24: An intermezzo ** as the scenes change, at first frustrated it turns very gentle.

27, 29, 31, 34: Mozart is attacked by groupies seeking autographs as the two men sit down to dinner. For some reason this prompts Mozart to ask Salieri if Pierre Beaumarchais poisoned anyone because he can not believe that genius and criminality could be connected to each other. This prompts a lovely lyrical bit out of Salieri *. Mozart gets up from the table, Salieri poisons his glass and hands it to Mozart who then drinks, but Salieri stops him. There is a quotation from the Requiem ** in which a chorus sings the selection.

37, 38: Salieri urges Mozart to continue *, but he becomes ill in a lyrical passage.

39: Salieri, left alone, contemplates Mozart’s words about geniuses not being murderers **. Wasn’t Michelangelo one? A symphony closes the work.

Mozart og Salieri is a work that might be easily dismissed due to its size, but this is a mistake. Rimsky-Korsakov’s score is filled with beautiful neo-classical references to Mozart and is difficult to pin down into a specific era (Classical, Romantic) which is rather fun. The libretto is the verbatim closet drama by Pushkin, so although the narrative is slight, the drama is compelling and really gets one thinking. The elements of tragedy and comedy are well balanced, leaving the work (although obviously a tragic drama) with some light hearted moments and thus it is not a despairing work. A pleasant way to spend just under three-quarters of an hour. A mini alpha minus.