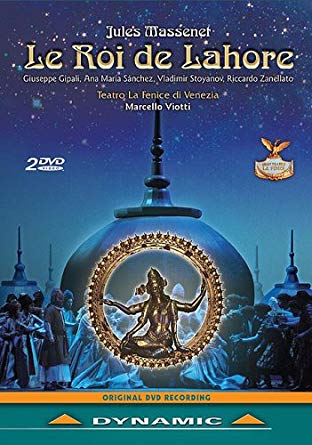 I wrote the first act and half of the second in June, I thought I would complete it now.

Unlike quite a lot of the operas I’m reviewed lately, I want everyone to know that I actually really love this one. It is probably the truest example among Massenet’s operas of Meyerbeerian grand opera. Exploitative of the French 19th century craze on operas with Indic settings (Lakme, Si j’etais roi). I know I’ll get bad press for this but I feel that this is a much better opera than Herodiade which followed four years later, not just because the libretto is better but Massenet appears to have paid far closer attention to the composition of this opera. It is not fragmentary, the scenes tell a continuous story, and there is care in the orchestration on a level found in only traces of the score of Herodiade (particularly the overture).

PLOT: Lahore, Hindu Heaven. 11th century.  Sita is the lover of King Alim, who is caught in a rendezvous with her by the wicked royal minister Scindia who is her uncle and also in love with her himself. To atone, Alim must lead his army in battle again the sultan Mahmoud but is murdered through Scindia’s plotting. Indra, chief Hindu god, feeling sorry for Alim, reincarnates him as a poor man with his life attached to that of Sita. Alim manages to have Scindia punished and dies when Sita commits suicide to avoid Scindia’s final attempt on her virtue.

0: The overture *** is magnificent and addictive from its fierce opening mirroring chords (a military theme which will return over and over and I love it!). This is followed by a lovely andante section and then more mirroring chords. The final minute is pure delight, almost sounding like the end of a film score.

7: The opening chorus (all male) starts off with some good exotic setting music and then a whirlwind ** as they all pray for deliverance from the Muslim invaders who are almost at the gates of the city.  Timour, the high priest, prays that the king, Alim will finally rise up and battle the invaders.

11: Scindia engages in a rather well orchestrated recitative and duet with Timour. Notice in the recitative when Scindia first mentions Sita, it is rather lovely in spite of his incesteous intentions ** as he wants Timour to release her from her vows as priestess. It does go a little low temperature as the priest declares that only the king himself could request such a thing, but there is a richness in the orchestration which maintains itself throughout the scene. Scindia tells him that Sita has been seeing a man in the temple, who he doesn’t know.

Scene 2: The temple of Indra.

18: A delicate chorus from the priestesses ** as Sita and Scindia offer service to the gods.

21: Scindia’s duet with Sita **. She is having none of her uncle’s propositions. It goes low temperature during Sita’s long andante passage where she recounts foolishly to Scindia of the man who appears to her during evening prayers, but the orchestration is so delicate, so sweet, and not in a saccharine sort of way. She tells Scindia to leave her, she will not go with him. He tells her that he will have revenge.

30: Scindia strikes the temple gong, what is going on? The people, women and men, flood into the temple *** and are about to cast Sita away when she pleads her innocence in the most lovely way. The priestesses are heard below singing the evening prayers, and then Scindia reveals what he is going to do, he will expose the man who meets Sita during evening prayers. Suddenly, he does arrive, it is the king!

38: Yet another gorgeous ensemble ***, starting with Alim who tells Sita he will take her away from all of this because he obeys her. She is amazed that her king speaks of obeying a woman. Scindia knows that the king is the one man he can not override as does Timour who never the less demands that the King assembles his army to save the city to expiate his profaning of the temple by his love for Sita. The king agrees and war is declared.

ACT 2: The desert of Thol with Alim’s encampment, sunset.

0: The act starts with a prelude which repeats some of the themes from the overture but also new more militant material **.

2: Sita and Kaled, along with an assortment of men and women, wait for Alim’s victorious return from battle to a rather agreeable tune * as a game of chess takes place at the same time as Persian slave girls perform a dance.

5: Sita and Kaled engage in a mild duet *. Sita is fearful and her betrothed’s page comforts her tunefully. A pretty and placid number.

11: Kaled, alone, sings sweetly that Sita find peace in her love for Alim **.

15, 21: The army returns from failure in battle ***, Scindia tells them that Alim is mortally wounded as he confronts his own men (who want to go back to the city) and Scindia who reveals that he has plotted to have Alim lose the battle and die in a chromatic ensemble ** during which Alim tries and fails to have Scindia arrested. References to the overture’s military theme abound, very welcomed.

28: Sita finds Alim dying but they duet sweetly for quite some time *** as they fantasize about their love which could have been. He dies, Scindia declares himself king, Sita is appalled but what can she do?

1: The chorus of blessed Hindu spirits ** who then embark on dancing of a circus hue, everything very happy.

20, 25, 27: After the entrance of Indra with its sobering orchestra backing, the remaining seven minutes of the act consist of a duet between the soul of Alim and Indra with choral accompaniment. The former king begs that either Sita die so she can join him or that he be restored to life, anything so that he might be with Sita **. Indra concedes to a chromatic and slightly ornery scale but the chorus of celestial Hindu spirits bring it up **.  He will not be a king, but rather a beggar, but his life will be tied to Sita’s thus when she dies, so will he. It ends grandly ***.

ACT 4: Great square before the royal palace, Lahore, at the start of the act just before sunrise.

1: Sita greets the night with dread and her duet ** with Timour, who promises to save her from Scindia’s intended incestuous marriage to her, makes for a very lovely opening to the act.

10, 14: The sun rises (what else), the chorus chants for the dead king and Alim the beggar wakes up ***. The officers go about their rounds to the most sparkling theme. Alim then addresses Sita (who is not actually there) and declares his love for her ** (already well known).

17, 20: Grand Coronation March **, followed by a bouncy chorus and Scindia’s address to the people (although much of what he says is addressed to Sita, or rather his thoughts about her and his incestuous intentions towards her) *. He finishes well.

24: The seven minute long finale *** starts with Alim’s confrontation of Scindia. The people start to think that perhaps this beggar is Alim. He defies Scinida when he sends his guards on him (obviously because he can not die unless Sita does), but the crowd that has gathered (apart from Timour and some of the priests) think he is a madman. Sita arrives acclaimed as Queen by all, Alim fears that she has betrayed him for her uncle.

ACT 5: The interior of the temple of Indra.

0: The dramatic entr’acte and Sita’s prayer *** as she has escaped her incestuous wedding and plans to commit suicide.

7: The finale *** starts with an exterior chorus which is a near perfect combination of excited and distantly soft. Alim has been ushered into the temple by Timour and he engages Sita in a beautiful duet. But Scindia arrives and tries to take Sita, who demands that he bow before Alim as his king, he refuses but she stabs herself and Alim reveals to Scindia that when Sita dies, so will he, there is nothing anyone can do now. They die together and rise up to heaven as Scindia realizes he is undone. Curtain.

Sketch of the finale by Antonin Chantiniere for the 1877 production.

The combination of religion and sexuality is better connected here than in Herodiade where the sexuality comes off almost as morbid sentimentality, particularly in the case of Herod. However, like in Herodiade, Massenet has a fascination with incest in this too (step-father/daughter there, uncle-niece here) and why this is so is beyond me. Is it really necessary for Scindia to be Sita’s uncle, really? Apart from the third act, which acts as a respite with the obligatory ballet, there is a constant sense of dramatic urgency in the opera. It is always moving forward towards its conclusion, which isn’t exactly tragic mind you. The plot is very simple, even simplistic, and pulls no punches. Alim and Sita are great characters, their relationship and undying love is completely believable from beginning to end, and although Scindia’s motives are creepy, what do you expect from the villain? Another thing, is this a semi-reversal of Tristan und Isolde? Here me out: we have attempted incest, and a couple that is finally united sexually only in death. The main difference is that the tenor gets there a lot more quickly than the soprano. Typical of men, really. What do you think? An alpha.