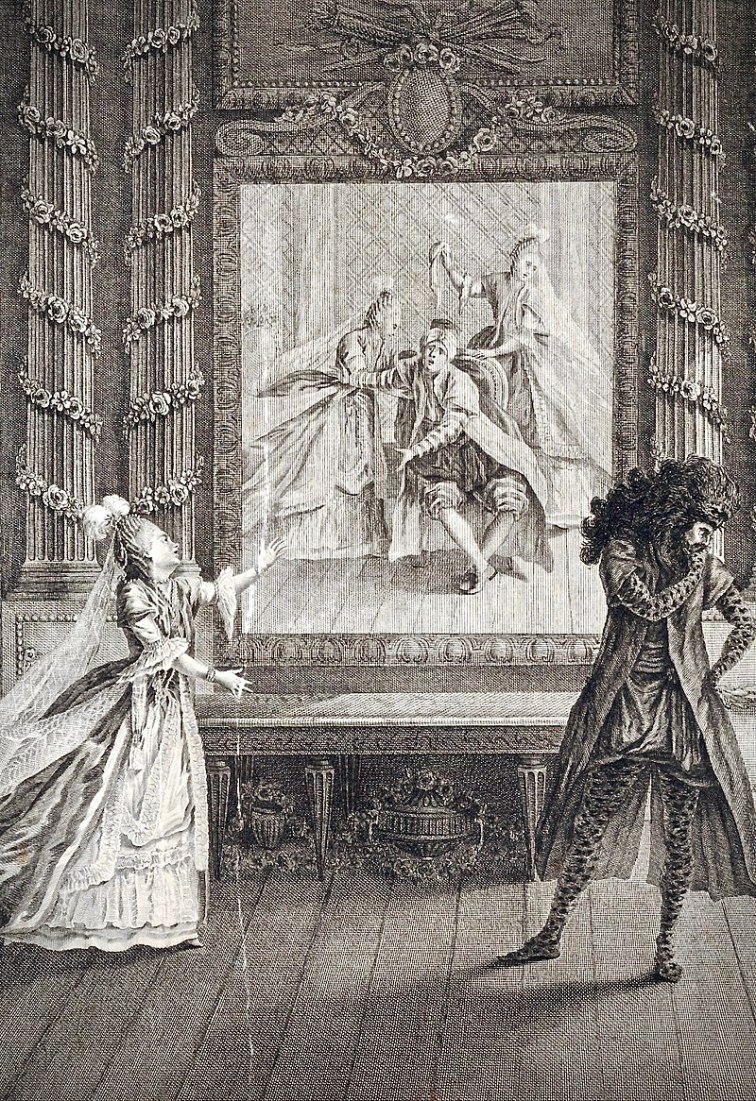 This might seem like a strange entry given that I rarely look at 18th century opera, much less French 18th century operas, and the subject matter might not be immediately apparent. This is actually La belle et la bête but in a medieval Persian setting. The orchestration is that of a classical orchestra: strings with woodwinds and horns.

SETTING: Medieval Persia. Basically the standard Beauty and the Beast with the father stealing a rose, Beauty goes to the Beast to take his place. She is allowed to visit her family again and returns to find the Beast dying of a broken heart when he thinks she has deserted him but she declares her love and he revives to be restored to his original form and they live happily ever after.

Livret is available at French WikiSource:

ACT 1: The Garden of the Enchanted Castle. (32 minutes)

0: The overture ** is about as fun as that of Mozart’s Die Entfuhrung and depicts a storm.

6: The first number is a song of thanks that the storm has ended from Ali, servant of Sander, a merchant from Ormuz **.

9: An aria for Sander as he bemoans his lost of fortune **.

16: A duet for Ali and Sander *. This is the “Be Our Guest” number, although we get far more from the guests than the service.

22: Sander plucks one of the garden’s roses which alerts the Master, but in the meantime Sander contemplates the stealing of the rose in a sad aria **.

27: Azor (the Beast) and his magnificent entrance aria ***. He grants Sander the mercy of being able to see his daughters again one last time but he must return to be executed unless one of the daughters will come to take his place.

31: The act ends with a concluding symphonic entr’acte leading to act 2.

10: Her father tells her the means by which he acquired the rose and that he must return unless one of the daughters goes instead *.

12: A duet ensues in which Zemire determines that she shall go instead and she enlists Ali’s help in bringing her to Azor’s castle **.

0: Another gorgeous aria for Azor ***. He contemplates the fairy who transformed him into this beastly figure.

8: A duet for Zemire and Ali as they arrive at the castle and Zemire is taken by its lavishness **.

23: Zemire sees Azor for the first time and is at first frightened. This is followed by yet another grand aria from Azor ***.

28: Zemire’s most famous number La fauvette *** is a strong coloratura piece, around twenty or thirty years ahead of its time.

35: Azor causes a looking glass to reflect Zemire’s family to her in a soprano-baritone trio ** thinking this will reduce her homesickness but it does the opposite and Sander mourns his daughter as her sisters plead with their father not to weep and Azor decides to allow Zemire to return briefly to her home.

40: She leaves to a gorgeous orchestral interlude **.

41: A two minute entr’acte connects the act to the following one *. If there is a weak item in the opera it would be this if anything.

3: Zemire returns but her father orders her to break her promise to Azor and not return to him. She refuses prompting a quartet as her sisters come in on the act **.

8: Yet another gorgeous aria for Azor ***, this time very sad as he lays dying watching the sunset and Zemire not yet returned as she had promised. Believing himself abandoned by the woman he loves he waits for death. A stunning piece among the many beautiful arias for Azor.

13.5: Zemire returns and believing him dead she embarks on yet another lovely aria *** which has lovely horn and woodwind ornaments and a long orchestral accompaniment  before we get into her number proper. She declares her love and this revives Azor.

20: Azor lives! and he is transformed back into his original handsome self. Sander and the sisters arrive at the castle with Ali and Azor announces his wedding to Zemire who basks in happiness. This prompts a sedate final ensemble number to Love which is elegant in its own way **.  A sweet little conclusion and worthy of a listen.

I really enjoyed this opera. Most of the score is very good and Azor’s multiple arias along with Zemire’s La fauvette and her act 4 aria are utterly breathtakingly gorgeous. Ali is good comic relief and his interactions with Zemire can be a bit of a hoot! This is my first Gretry entry (try saying that five times!) and I must say that I now really like an 18th century opera composer who wasn’t Mozart! The famous tale (the most bizarre of fairy tales) is all here and then some (the genie ballet!). The dialogue is a little annoying, but isn’t dialogue always annoying in opera? Overall an alpha, maybe even plus! A very rewarding and elegant work which rewards repeated listening.