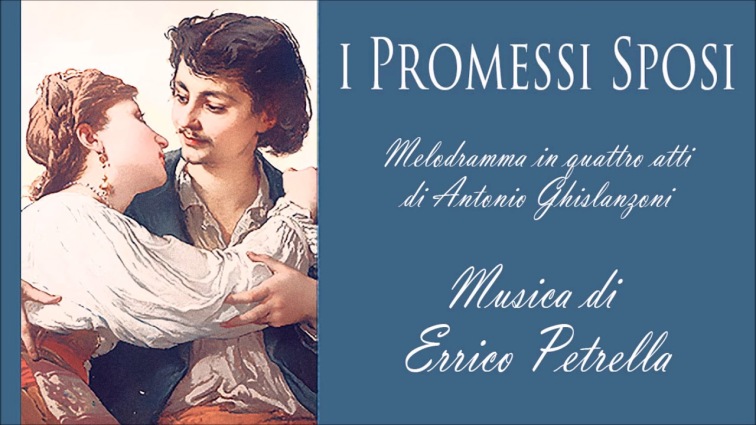 Alessandro Manzoni’s novel is sort of the Italian novel, to the point that grammatical structures and vocabulary invented by Manzoni in the book are still taught in Italian secondary schools to a level equivocal to Shakespeare in the Anglo-sphere, so it was sort of inevitable that at least one of the many operas based on it would show up on this blog, although I had thought that Ponchielli’s version would be the first. We have met with Errico Petrella on this site before although considering how Ione is considered to be his “better” opera I don’t have much faith in this one.

SETTING: Near and around Milan, Italy, 1628-30. Lucia (soprano) is engaged to silk weaver Renzo (tenor) but her wedding plans are stalled by the wicked Don Rodrigo (baritone) who wants to seduce her to win a bet with his cousin Attilio (tenor) but Fra Cristoforo (bass) and the opera’s comic relief help Lucia to foil the wicked nobleman’s scheme.

Scene 1: A city street, Veggasi, a fictional town Manzoni made up for the novel.

3: The orchestral introduction starts with a series of bangs and then spirals out but really isn’t all that interesting. It thankfully dies out to a tranquil but just about as uninteresting  choral number with the genders taking turns *. Apparently these are songs from Lombardy, which is where the opera takes place.

9: Don Abbondio’s aria * is preceded by a very long (nearly five minute) introductory scene with Griso and Tiraditto in the the priest Don Abbondio is told by the two men not to go through with the wedding of Renzo the silk weaver and Lucia which is scheduled for the next as the local nobleman Don Rodrigo has a bet with his cousin Attilio regarding the bride. The aria is backed by the male chorus but this really doesn’t help matters either dramatically or musically and I’m a little apprehensive about giving this a star to be honest.

Scene 2: A courtyard in Lucia’s house.

12, 13: The interlude scurries about as it transforms into a feminine chorus and then a half-way catchy interaction between the chorus and Lucia and finally her aria *. Most of it seems like copy-cat Verdi of a lower voltage.

20: A second aria for Lucia * which is sort of a duet with Renzo but not quite.

22: Upon the arrival of Far Cristoforo we get something a bit better than the previous music **.

24: It eventually becomes a glorious quartet with the three and Lucia’s duenna Agnese **.  By far the strongest moments in the opera so far.

Scene 3: A hall in the palace of Don Rodrigo.

32: A chorus of male courtiers is followed by a rather forgettable couplet for Don Rodrigo *.

35: Fra Cristoforo saves everything again ** in his duet with Don Rodrigo. Although at first Rodrigo fringes humility before the holy man, they eventually start yelling at each other and the friar is forcibly removed.

6: At first the ten minute duet for Lucia and Renzo is rather dreadfully dull but it upgrades ** in the second half as they interact with a hermit-disguised Griso (or at least this is what the libretto says should be happening) and the scene ends.

{There should be an aria for Don Rodrigo here which explains a plot to kidnap Lucia which clears up some of the plotting but for some reason it is cut}.

11, 12: A misty chorus of oddly tranquil beauty * is followed by a comic aria for Perpetua, the contralto servant of Don Abbondio who breaks up the number to alert the town that his house had been set upon by thieves and murderers.

17: The choral sequence * here has a comic opera effect which feels a bit out of place.

Scene 3: On the river Adda.

24: Lucia’s lovely moonlight aria ** in which she starts off by bidding the mountains farewell, then mourns her wedding which will never take place, and then prays to the Almighty to end her suffering through convent entry.

33: Fra Cristoforo comes on with Renzo and a farewell trio ensues. For some reason Cristoforo is a real inspiration for Petrella with all sorts of effective brass ornaments as the lovers say farewell to the mountains and Cristoforo calls upon G-d to protect them both **.

ACT 3: A village at the foot of the Italian alps, around two years later. (21 minutes)

0, 4, 8, 14: The opening chorus is a little odd but intriguing at the same time *. A semi-chromatic comic scene ensues as Don Abbondio and Perpetua arrive * which turns into a long comic aria for Don Abbondio * which isn’t terrible. Agnese comes on and there should be an aria for her here but instead we cut immediately to her dialogue with Perpetua which is a little frustrating.

17: The act finale starts with the discovery of Lucia in the village **, having escaped Don Rodrigo’s men. She has been ordered safe passage to a convent in Milan by some unnamed Cardinal and the villagers decide they have had enough of their overlord and to storm the castle. An effective act finale.

Scene 1: Antechamber in the palace of Don Rodrigo.

0, 5: A sleepy time prelude * which lasts a bit longer than one would expect is followed by a mad scene of sorts for Don Rodrigo as he recounts a dream he has just had to Griso *.

9: Suddenly there is furious music from the orchestra * as the chorus of supposedly angry and given the novel plague infected villagers comic operettas its way into the palace. More creepy than effective.

Scene 2: A square in Milan near a convent, a week or so later.

12: Petrella sticks in a nice tenor aria for Renzo here ** complete with harps and is stopped by internal voices (including Lucia obviously) from inside the convent.

16: The Salve Maria *, an effective but rather standard and stereotypical number in opera  given the occasion (chorus of nuns, soprano heroine among them).

20: The interaction between Lucia and Renzo * in which he is so excited to have found her again and she declares that their marrying is impossible because she has made vows to the Madonna to become a nun and being a good Italian girl rule number one is never break a vow to the Madonna because she will cut you. Everything gets really sad and Renzo emotes for a really long time.

23: Fra Cristoforo arrives and reveals that the service in the convent is actually a funeral,  for Don Rodrigo who has died in the plague. Everything gets straightened out so the wedding can take place *.

29: A nice little lilting bit in the high strings turns serene by the curtain fall and so the opera ends well **.

I may be missing something, but the way Petrella (or rather his librettist, the comparatively famous Antonio Ghislanzoni, the librettist of Aida) dramatized the novel is rather dreadful. As a comparison, you can look at Ponchielli’s opera of the same name here. The comic elements are mostly to blame, although Ghislanzoni really doesn’t build up Don Rodrigo very well, he is more of an afterthought than a truly threatening antagonist as there really isn’t enough of him, and the first two acts are rather episodic to a I Lombardi alla prima crociata level with their large number of scene changes. Ponchielli’s librettist  ignored Abbondio and Perpetua (they are in Manzoni’s novel so I can’t condemn Petrella and Ghislanzoni for the characters themselves) but the comic relief is tiresome and surely there are better ways of going about them musically than what Petrella ultimately gives them. The comic elements are about as dire as those in Verdi’s La Forza del destino and the final scene resembles the finale of Gounod’s Mireille even if this opera does end comparatively happily. It also smells a bit too much of Francis Marion Crawford’s The White Sister. Petrella does do a good job with Fra Cristoforo (who basically saves the first act from musical oblivion not once but twice!) and most of the best music in the opera occurs when he is on stage. In the second act, the latter half of the love duet in the first scene and the entirety of the third scene with its aria for Lucia and trio with Renzo and Cristoforo (the best tableau overall in the opera) are memorable but the rest is rather dull. The third act is saved from total dramatic meaninglessness by its good finale and the final act has a good tenor aria and an okay closing trio con coro. There are cuts (including two entire numbers), as I indicated above, and the sound quality of the 1950 live performance recording is at times horrid and other times okay which might have improved my impression of this work had they been included or if the sound was better, but ultimately this is a gamma with some beta patches that are worth looking out for. Honestly I would skim this for the two-star items and maybe all of the final scene and then put it to rest.