Favola in musica in a prologue and five acts. Running Time: 1 hours 43 minutes. 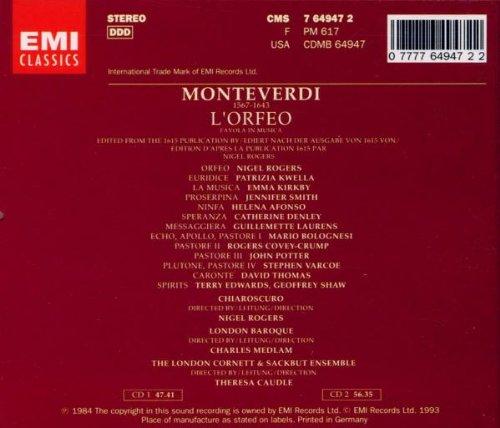 This was probably the third or fourth opera I ever heard, when I around nine. I also had the first three acts completed before my recent Wagner stint so I figured I would finish the last 30 minutes and send it off. I find that this is one of the few operas from the 17th century that can really hold its own with much later works.

SETTING: The story of Orpheus is rather simple. His wife Euridice dies from a snake bite shortly after their wedding and he tries to rescue her from the underworld but fails to fulfill his end of the bargain with  Pluto by looking back at her, causing her death state to be permanent. In this variant of the story he is rescued from a life of grief (and being torn apart by followers of Dionysus) by his father, Apollo.

This review is for the recording from 1984 with Nigel Rogers in the title role conducted by Charles Medlam. It is available at Amazon Music.

0: The opening toccata **, rather recognizable and repeated thrice so we know something big is about to happen.

1: The six minute long Prologue itself * in which La Musica declares her ability to calm all troubled hearts. She claims she can do this by recounting the tale of Orfeo (who tamed beasts with his song) and commands silence. It has one repeated melody that occurs when she is between verses (there are five stanzas).

3: A tenor shephard introduces us and the rest of the troupe to the wedding of Orfeo and Euridice. The chorus is excited as is a mezzo-soprano Ninfa. A rather catchy celebration chorus pops up **. Then we have more from a high tenor shepherd (there are apparently four solo shepherds, two baritones, one tenor and one high tenor which is apparently something between a tenor and an counter-tenor but not quite a counter-tenor).

5: Orfeo’s first utterance *, addressed in theory to Euridice. Her own response is very brief in comparison.

8: What follows is about seven minutes of rejoicing music **. First a short repeat of that catchy chorus from earlier followed by what I suppose is a prayer to marriage. Around three minutes in there is a short wedding march and then three shepherds talk about Orfeo, they are joined by Ninfa and all is abuzz with how Orfeo has changed since falling for Euridice. It ends with a brief bit for the shepherds and one last chorus.

0: With the wedding obviously some time ago, we have Orfeo very contented singing with the shepherds about the beauty of nature **. The chorus joins in and the dance tune gets even more lively.

6: The celebrations end with the cries of La Messaggiera *** who recounts how Euridice has died as a result of snake attack while picking flowers. Orfeo exclaims “Ohime”. The shepherds get involved, and Orfeo is finally given a longer passage to react.

16: The rest of the players sing a funerary madrigal * which sounds oddly similar to something by Carlo Gesualdo. La Messaggiera condemns herself for having told Orfeo such horrible news and that she will forever after mourn.

21: More funerary music and another duet for the shepherds followed by a return of the madrigal ** followed by some more duetting from the shepherds, madrigal again, and some closing orchestral music as the act ends (you will recognize it from the Prologue, it is the “force of music” theme that accompanied La Musica.

ACT 3: The Gates of the Underworld.

0: A jovial entr’acte * starts off the transition, the tune is repeated.

1, 2: Orfeo ** has been brought to the infernal gates by Speranza, but seeing the writing on the wall, or rather door: “Abandon all hope all ye that enter here”, she makes a quick dash out *.

6: The arrival of Caronte, ferryman of the Underworld *, the accompaniment is a rather brooding solo organ.

8, 9: This is followed by a very noble theme from the orchestra (it will return and is in some ways a leitmotif for Apollo **). What follows is an eight minute long aria from Orfeo *** with some interesting coloratura and some effects from the brass section.

19, 21, 22: Caronte falls  asleep as a result of the long lyre interluding. Orfeo has some more arioso which borders on something a bit more modern and then there is more Apollo motif *. Watch for the end of the scene in Orfeo’s vocal line **, quite lovely. The act ends with a repeat of the number from the top of the act, and then a rather up beat chorus ** on the victory of man as Orfeo steals Caronte’s boat and sails across to Hades.

2: Persephone pleads Orfeo’s case before her husband in recitative. Pluto’s response starts dark and deep but becomes somewhat tuneful against a lone organ accompaniment *. He agrees to release Euridice, but only on the condition that while leading her back to the world, Orfeo must not look back at her: a single look and her death will be permanent (this will bode well….). The Infernal Choir sings briefly as Orfeo arrives.

8: Orfeo is overjoyed at this chance to resurrect Euridice **. But he starts to have doubts and looks back after a banging sound freaks him out. Orfeo tries to follow her back to hades but is turned back by some overpowering force.

11: Euridice gets her longest patch of arioso in the entire score as she says good-bye forever to Orfeo and disappears *

13: The act ends on a tuneful orchestral interlude and sad chorus with traces of Apollo’s music in the next act **.

0: Back to the “force of music” theme. Orfeo is very sad, obviously. For eight solid minutes   * he despairs (accompanied at points by a tenor echo)

8: Now, my favourite part of the opera: the entrance of Apollo ***, a regal piece. He tells his son to not mourn and join him in heaven so he can recognize Euridice’s likeness in the stars. They ascend to heaven in the closest thing in this opera we have to a duet with what would eventually be considered bel canto trills but that’s another two hundred years in the future.

13: The chorus of Shepherds has one last happy outing to give the story a moral **.

14: A moresca or “moorish dance” concludes the opera, it is lively and tuneful **.

L’Orfeo is about as close to Rossini, Verdi, or Wagner as we are to them. That is not to say that it isn’t great, it’s just that it was literally just four years shy of being possibly heard by Queen Elizabeth I. In other words, and in no disrespect to the Virgin Queen, it is ancient, 411 year olds to be exact, although when I first heard it it was more like 393. It bizarrely holds up well for its extreme age, especially considering that other music written about this time either is lost or lies in obscurity because it sounds like it was composed on Kolob or Klinzhai. It does get boring (the arioso passages tend to feel longer than they actually are) but the opera moves at such a brisk pace that gradually you don’t notice this that much. And yes, this is opera, very primitive but the basics are present including great attention to vocal beauty. The orchestra does sort of act like a big banjo (Italians….) but Monteverdi gives them some repetitive but memorable music to perform. The best projected of the characters are male (Orfeo obviously, but also the shepherds, Caronte, Pluto, and especially Apollo) although Persephone and especially the Messenger have brief but strong parts. Euridice is a bit of a bore, but she only has about three minutes of music. No doubt the weaker female roles are due to the fact that they were performed by castrati and probably doubled. The chorus gets some rather catchy numbers, all at the right spots in the narrative. An A.