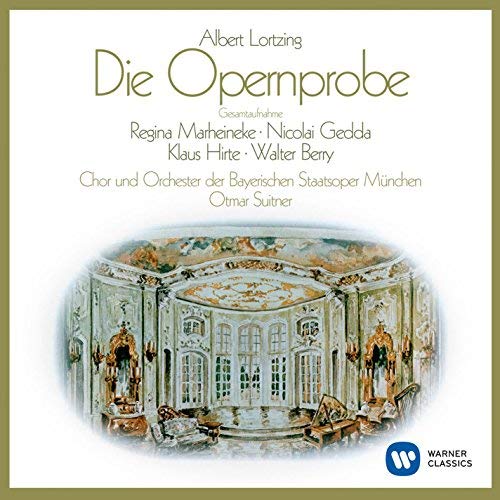 So, I need some comic opera, bad. Thanks Nick for recommending Lortzing. Before I get into Hans Sachs (yes THAT Hans Sachs, Wagner didn’t come up with a totally original story in Die Meistersinger after all!), Regina,or Undine I think I will do a short comedy first. This was Lortzing’s final opera (he died the morning after the premiere), although from the sound of it I would think it was his first because half the score sounds like Mozart wrote this thing. It takes place in the palace of an opera-obsessed count who addresses his staff in recitative and makes participation in his opera productions a prerequisite for employment. On this particularly morning an opera rehearsal (the English translation of the title incidentally), it transpiring.

0: The overture * sounds like Mozart could have written it, probably because the opera is set in 1794 (actually most of the score sounds more like Mozart than anything else). It is a little monotonous but cheerful. This number specifically reminded me of Strauss’ Ariadne auf Naxos.

4: The introduction * consists mostly of Hannchen, the chambermaid, conducting the start of a rehearsal rather furiously. She sees two people running about in the garden and has Martin, one of the other servants, scout out who they might be.

7: Another furious chorus this time * but very short.

9: The strangers identify themselves as Baron Adolph von Riental and his servant Johann **. A few things are explained and the Baron falls in love with the Count’s daughter Luise. The two men decide to pass themselves off as singers for hire.

13: A song from Luise * to a waltzing tune. Pretty, and long. Hannchen figures out that the runaway tenor is Luise’s arranged betrothed whom none of them have met (oh the irony!). The Count arrives, a very brief arioso of about twenty seconds develops.

21: Adolph and Johann entertain the Count, Countess, and Luise ** as Hannchen serves coffee and cake and all the characters present make comments.

25: Adolph’s tenor solo **, an interestingly serious number with a subtle power to it.

29: The Count and Adolph engage in some sort of dramatic dialogue in a recitative (the Count’s  primary form of communication) to the accompaniment of spiccatto strings. There is then another very brief ensemble *.

33: The inevitable Hannchen-Johann duet is actually rather tuneful **.

39: The finale *** starts off with the choral arrival of the Old Baron, Adolph’s uncle who was forcing him to marry a girl he never met before. The chorus is rather lilting and waltzing. We get some agitation that sounds like it was copied from the score of La clemenza di Tito, and the two barons confront each other. Everything gets straightened out and the engagement is officially on. The stretta is all of forty seconds, curtain.

This is cute. It starts off as a latter-day Mozart rip-off and ends as a latter-day Mozart rip-off. It is also very slight: apart from four people falling in love and the clearing up of a case of mistaken identity nothing happens except some hilarious padding about the household staff of a crazy count who worships opera (my dream employer!). I like this more than Mozart’s Impressario but the music isn’t as good. Yet, there isn’t that much music in Impressario so…a B+/A-?