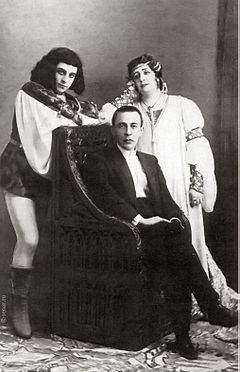 I am apprehensive about this posting because I am very unhappy with the results. I was originally going to just do The Miserly Knight. Then I realized that I had less than 700 words written so I decided to combine reviews as these two operas were originally performed as a double bill. Do not expect me to be happy here, I’m unhappy with both, however I have provided live performances this time.

PLOT: Medieval England. Albert, the son of the Baron, has squandered all his money on wine and women and now needs more money if he is to maintain his lifestyle. His father refuses to help him and he is declined a loan by a money-lender who offers him poison to kill his father with. He appeals to the Duke, who at first tries to get the old man to support his son but this only enrages the Baron who challenges his son to a duel. When Albert accepts the Duke banishes him and the Baron dies of shock.

0: The opera begins with an extremely long (eight minute) prelude *. I apologize for the creepy feminine figure representing avarice and greed.

11, 16, 22: The opening scene, in which Albert discusses his problems with his servant Ivan is okay * and there are even hints of Tchaikovsky. The moneylender comes on and has an okay time talking about the situation *. They discuss the mortality of the Baron. The poison is offered as a solution to Albert’s money woes *. This is rejected by Albert (surprisingly). He decides to ask the Duke to plead his case instead and the scene ends with a good orchestral finish.

27, 34: Sorry again for that freakishly terrifying female acrobat, however the orchestral intermezzo is very good *. The Baron is worried that if he dies his son will get all his money and spend it all in a matter of days. His monocant is okay but thankfully also not very long. There is a climax * and he goes over his coin collection (considerable).

38, 41, 49: Suddenly, something other than depression wells up in the orchestra, unfortunately it is avarice as the Baron counts his six big chests of gold *. The music sounds like it should accompany one of Tchaikovsky’s ballets *. He contemplates his son’s dissipated lifestyle *.

Scene 3: A room in the Duke’s castle.

52, 55, 60: Albert bursts on the scene petitioning the Duke for help *. The Baron comes on and defends himself against the Duke’s Albert-supportive arguments. This involves a weirdly noble orchestral ornament *. The Baron goes on about how Albert is a wasted life which the Duke keeps trying to defend. He tells him that Albert tried to kill him. Albert exposes himself to his father, accusing him on lying. The finale * consists of this confrontation and the banishment of Albert. In the last two minutes the Baron dies. More weird female gymnast as he searches for his keys and his property gets handed over to the Duke.

The score is of interest only for its retro pseudo-Tchaikovsky style given it’s Rachmaninoff circa 1906. The score is not pallid by any means, but rarely is it interesting either. The libretto is dreadful, although based on a drama by Pushkin of all people. The story, what little of it there is as there is almost no action, just dialogues and monologues, is mostly uninteresting and the probability of a Jewish moneylender, even in medieval England, is very doubtful given their expulsion in 1290 and seem more related to Russian perceptions of Jewish people, never a good thing to get into. The one thing I could possibly say that is positive is that this is a rare operatic example of a psychological study of greed. There is no attempt at escaping the darkness, and this becomes suffocating very quickly. After the prelude I spent the rest of the opera wanting it to end because it is hardly entertaining. This might be the first opera on this blog to merit a D.

26: The prelude is again very long, and more boring than that of Miserly Knight. Frankly it makes me suicidal, which might possibly have been the composer’s intention. The curtain rises and the chorus comes out, but we are also in the second circle of hell which means no relief in sight. Dante and Virgil come on, I would give a star to Dante’s single line here but I am far too bored. The rest is just gothic horror opera at its most dreadful, and boring. There is agitation from the orchestra as Dante and Virgil descend among the damned. More Gothic horror, grotesque rather than frightening. Suddenly we get something good as Francesca and Paolo come on *. It doesn’t last long, all of 30 seconds, but it is better than anything else that has been going on. Thankfully the prologue ends shortly thereafter.

TABLEAU 1: A room in Castello Malatesta.

29, 34, 37, 43, 48: Finally something interesting * comes out of the orchestra during the entr’acte. Lanceotto Malatesta, husband of Francesca and brother of Paolo (also their killer) has a long monocant with the chorus, the highlights of which are almost entirely in the orchestra *. He thinks of Francesca ** and how she wants his hot kid brother and not him in her bed. You do feel sorry for Lanceotto, but at the same time the librettist has focused far too much attention on the relationship between the two brothers and it borders on the homoerotic, which really isn’t were we should be going here at least but we do get a good four minutes of music out of it. Fleeting orchestral patches of daylight are side by side with ennui. Francesca arrives to one of these patches ** and as it continues it gets better. He asks her if she loves him *. She tells him the truth: she can not lie, she does not love him. He tells her he will return after the battle and the scene ends effectively enough.

TABLEAU 2: A room in the castle.

54: Paolo reads to Francesca about Gwenivire and Lancelot **. She resists his overtures of  love because she doesn’t want to betray her husband but slowly her defences weaken as he continues to read to her.

61: Things start to get physical and she tenderly rebuffs him **.

64: Paolo declares his love for Francesca **.

71: Yet another orchestral intermezzo, this time before the lovers are caught and killed *.

75: Not much of anything happens other than a moral: There is no greater sorrow than to remember joy in time of grief. A star for the surprisingly traditional ending *.

Rachmaninoff was a would be opera composer who did not know how to compose operas. Instead he wrote something between opera and Wagnerian music drama, involving long, dreadfully drawn out sinfonia and Rheingold-esque through-composition. Here the libretto is by Modest Tchaikovsky, and it is a real dud. There is zero sense of dramatic pacing until Francesca comes on more than half-way through the opera and even then there isn’t enough plot to carry the whole thing. There are basically just four situations that this opera consists of: Hell, Lanceotto’s revenge plan, the lovers’ cliche, and their deaths. Admittedly the lack of concrete plotting is because Rachmaninoff was going for a “symphonic opera”, which means it makes little dramatic sense. What makes Francesca a superior item to Rytsar is that frankly it has sex appeal and, after the first fatally boring half hour, some rather good music, in particular Lanceotto’s monologue, his interaction with Francesca and most of all her duet with Paolo. Lanceotto might be a killer, but he is a horny bari-hunk killer who is jealous that his better looking tenor brother gets to paw all over his sexy soprano wife. I do dislike the production though. Nancy could have pulled this off much more subtly, perhaps even more regally, and while spending less money. C.