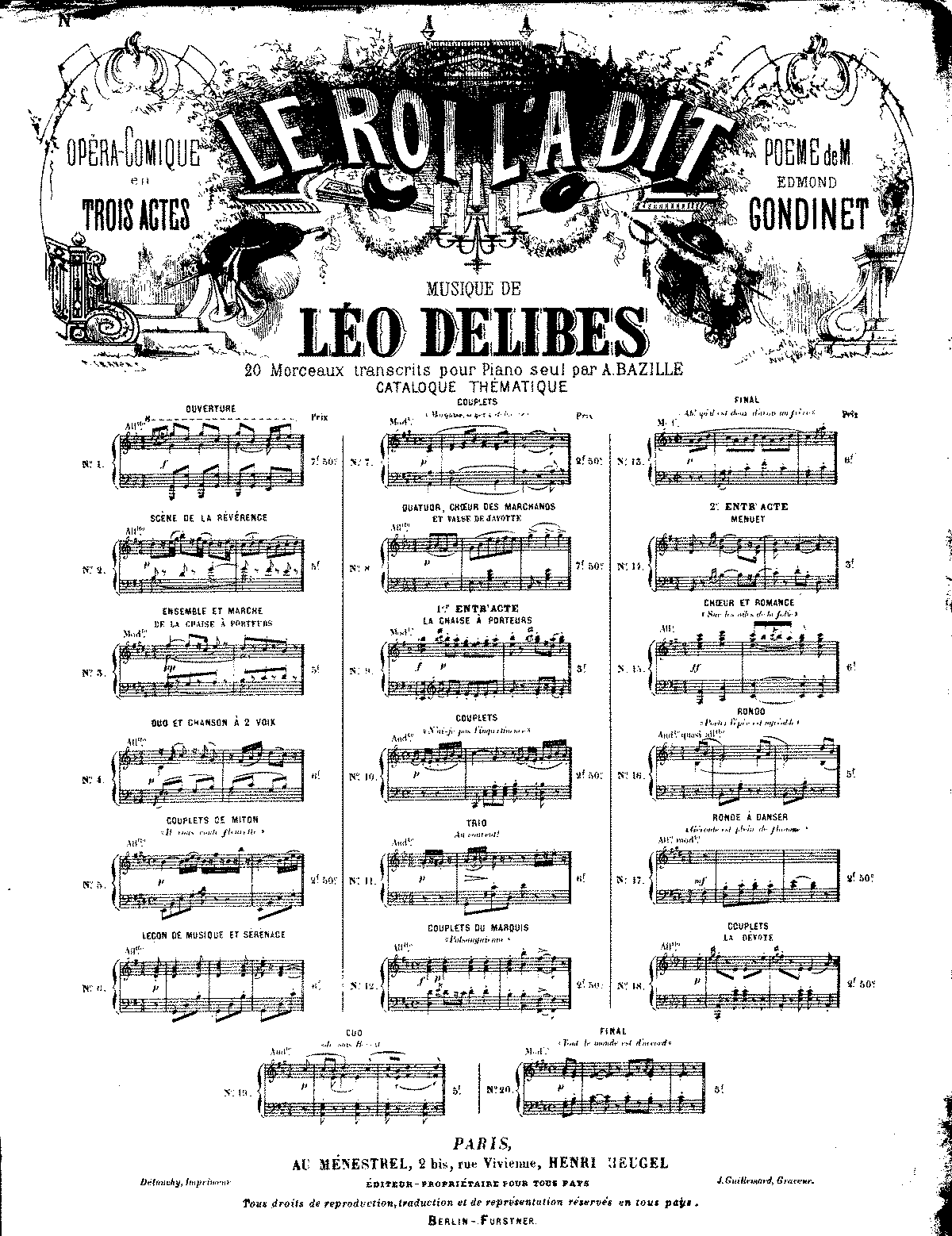 I had two recordings of this opera. One is the 90 minute recording from ina.fr which I have since misplaced. The other is this recording which I got from malibran.com. It is from 1956 conducted by Jules Gressier with Christiane Jacquin as Javotte and Michel Senechal as Benoit. Neither records is complete (there are 19 numbers in total, this recording has 14 and the other if I recall has 16 although some of the others are longer in the the ina.fr recording). The image is the leitmotif page for the piano-vocal score with the beginnings of most of the numbers. The complete score is available at imslp.org.

PLOT: The estate of the Marquis de Moncontour, circa 1700. Benoit, the boyfriend of the the Marquis’ maid Javotte, is drafted into pretending to be his son so he can be presented to the King, Marquis having only four daughters and no actual son. Madness ensues.

ACT 1: The drawing room of the Marquis’ home, a piano.

0: The overture ** is long but rather striking, perhaps one of the three or four best items in the opera.

7: The introduction * in which the four daughters and Javotte bid good-bye to the Marquis as he goes for his interview with the King.

14: The first love duet Javotte-Benoit is amusing more so for the fact that the tenor claims that if he were Swiss he would be rich and we learn that Benoit’s uncle is the royal chef (which does count for something) than for the melody which is mild and mediocre. The second duet has a pastoral mode to it which is much more interesting *.

17: Miton, the music master, arrives to give the four daughters their music lesson with a quaint little ditty more parlando than arioso *.

20: Miton tries out a piece from his latest opera on the girls but they get interrupted by a lovely serenade by two of their beaux. The quartet ** is a shockingly striking piece about Orestes and the Furies. The girls each accentuates the word “l’enfer” rather amusingly. Miton tries to keep them all on task but when the tenor and baryton-martin (Comtes Flarembel and La Bluette) arrive outside it is all over and a hilarious scene ensues during which the Marquise arrives and the girls have to hide the two young men under their skirts and sing Miton’s quartet more and more loudly all the while their mother screams at them to stop. This is probably the best number in the opera, certainly the best of the ensembles.

25: The Marquis returns and relates how he is in a bind to produce a son to present to the King because he has lied and claimed he has a son. Benoit is enlisted amid his own personal protests that he wants to be Swiss but when he sees how his sisters are he agrees. They patter about for a moment and the act ends **.

ACT 2: The Garden of the Marquis.

0: There is an entr’acte here which can be accessed online which is nice * and then we have Benoit’s couplets **.

3: He is hosting a party but quickly discovers that the sisters have all been sent to a convent by the two suitors who enlist him to help them rescue them in an amusing if very long trio *.

10: Javotte has a quick and flighty little aria *.

13: The five minute finale ** to this act starts off with some fear as the four daughters return bringing with them the zaniness the opera is known for (if it is know for anything that is). They embrace their “brother” in thanks that he has helped their lovers to liberate them. It has one flight tune that gets repeated three times and then a mighty if boxy climax as the curtain falls. The Marquise orders everyone out.

0: A short ariette for Javotte again *, this one taking its tune from the overture.

2: An aria, only slightly longer than the previous, for Philomene, one of the four daughters. It is structured similarly to a light waltz and is better than one would think *.

4: The third Javotte-Benoit duet ** has a magnificent final climax.

10: The four minute finale ** in which all the characters are reconciled and admit that the King has gotten what he wanted. “Tout le monde est d’accord” as the four daughters and Javotte bring everyone in for one last fugue.

This is an enjoyably light work.  Being an operetta, most of the complexities of the plot are taken care of in dialogue. The best numbers are the overture, Miton’s quartet for the four daughters in act 1, all three finales, Benoit’s couplets in act 2 and his duet with Javotte in act 3. Unfortunately the plot is much more complicated than what I have alluded to in this sketch of a review as little of it remains in either of the records. This is a shame in many ways because the plot is rather fun to follow along and we don’t get any of that here. The recording also does not demonstrate fully the rather large cast of soloists (there are 14 roles). This and the 1959 recording also have one or rather two interesting features, the roles of Flomrembelle and La Bleuette are performed by a tenor and a barton-martin here but the premiere cast had these parts sung by a soprano and a mezzo-soprano respectively. I think this works better but that is just my option. A C for the recording and a weak B- or even C+ for the opera.