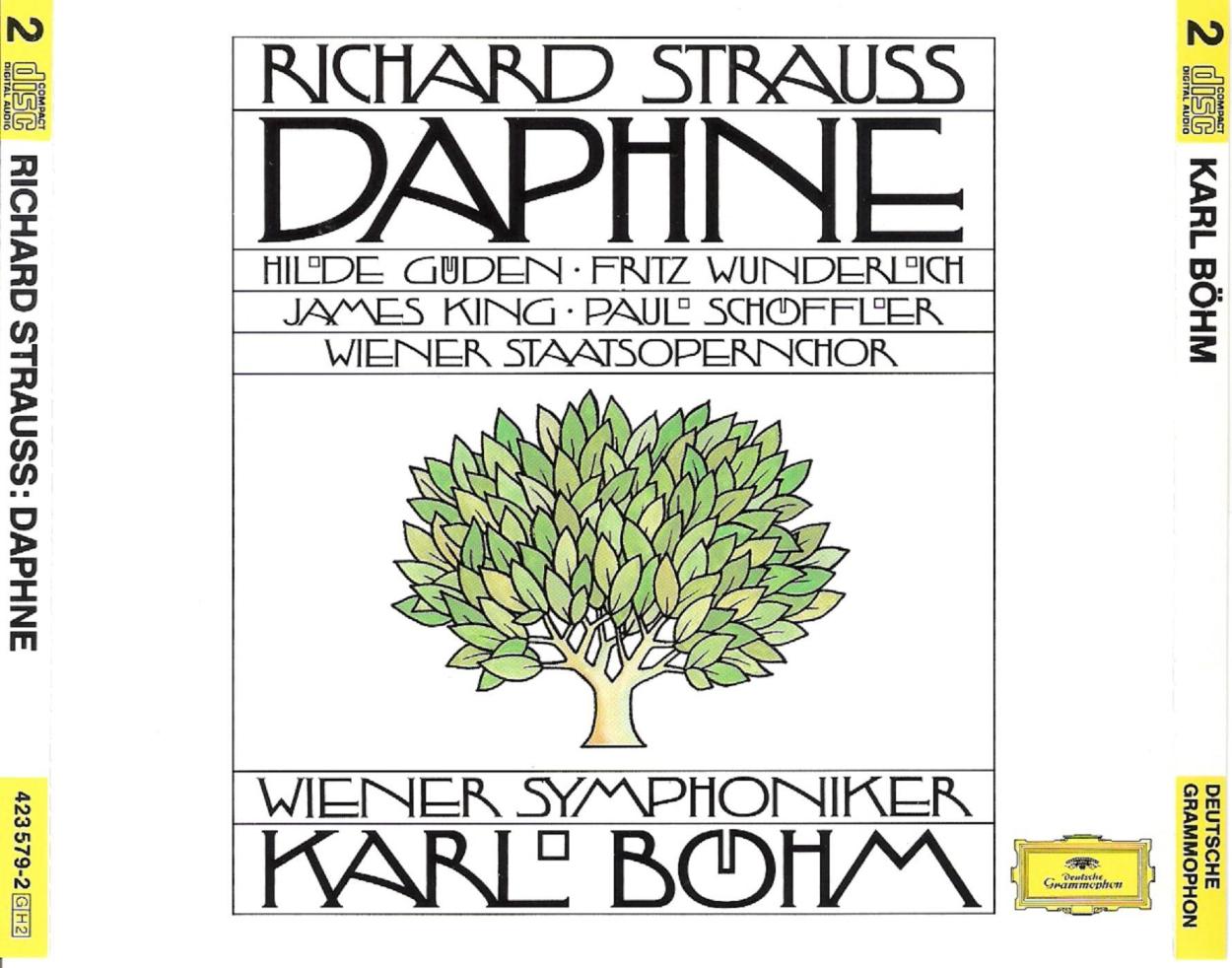 This is a change, a late Strauss bucolic music drama in one act, in German. I usually avoid operas in German but here I could not resist. Like Salome and Elektra before her, Daphne provided Strauss with yet another subject for one of his single tableau opera “movies” (my words). This recording was conducted by Karl Bohm, to whom the score was dedicated which is an interesting bit of trivia.

PLOT: Ancient Greece. Daphne is a chaste girl who loves nature (especially trees) and has no interest in human romance in spite of the fact that childhood friend Leukippos loves her. A stranger herdsman tells Daphne that she will soon be united with the sun, but he gets romantic and she runs away, meanwhile Leukippos dresses up in the dress Daphne was to wear for the festival of Dionysos and dances with Daphne who thinks he is a woman but the stranger reveals the trick and Daphne declares that both men are deceiving her so the strange reveals himself as Apollo and shoots Leukippos with an arrow asking Zeus to transform Daphne into a tree so she can have peace. She is transformed. The end.

0: The prelude * consists of two parts: a two-minute nature tune in the woodwinds followed by brass and a brief and relatively mild storm, this second part haunts the next few minutes or so of the opera.

3: Four shepherds talk about the festival to a rather melodic whirlwind *. After more stormy stuff the male chorus has a nice, distant, melodic bit.

6: Daphne’s arrival and hymn to nature *.

11: The climax of her song **, later with almost screaming high violins.

15: Leukippos arrives and the two of them discuss trees, their childhood, and their relationship in general, leading to a nice arioso from him *. They go about melodically for some while.

20: Daphne’s mother Gaea arrives and sings some of the lowest music ever written for a woman (even down to an Eb3!) *. They discuss how Daphne must one day turn to romantic love, but she is having none of it.

25: Two girls arrive and torment Daphne for refusing to go to the Dionysian rite *.

30: There is a noble change in the music *** as Daphne’s father Peneios arrives and discusses with the men (and Gaea) that he believes the gods are going to come to earth and the Daphne issue. The music builds up to a climax.

34: The mysterious stranger arrives * and introduces himself. Unlike Leukippos, Apollo’s music here is far closer to the brooding Rheingold eighth-note recitative over orchestra of the most other Strauss tenor parts.

39: After Peneios and Gaea go off to prep Daphne he gets something a little more lyrical *. Daphne arrives and they go about a slightly bizarre duet in which he calls her sister and she eventually calls him brother.

46: Apollo explodes on her ** leading to the kiss, a rather longish patch of orchestral interluding as the male chorus returns in the distance singing about Dionysos and Aphrodite.

53: Peneios returns and the festival begins ** and we get something close to Elektra’s dance. The dancing continues for a while.

57: Gaea tells Daphne to drink (gets a negative response). After more dance music *, and Daphne dancing with the in-transvesti Leukippos wearing her dress, Apollo gets angry and there is a great storm, or at least thunder, which ends the celebration.

61: Apollo and Leukippos confront each other, this mostly consists of an aria passage for the latter *. Daphne accuses the stranger of deceiving her.

63: Apollo’s response to Daphne’s accusations is gorgeous as he reveals his true identity **.

66: Apollo leaves with Leukippos shot by an arrow, dying. Daphne comforts him to big stormy music *.

69: From this point on the opera consists of two long solos for Daphne ** and Apollo followed by Daphne’s transformation scene which consists entirely of yet another solo for Daphne accompanied by the orchestra as she is transformed into a tree. This goes on for some 25 minutes before the opera comes to a close. Daphne’s first solo consists of music that most people will recognize as the standard but sweet Strauss soprano music.

77: Apollo feels really contrite for what he as done and so he calls upon Zeus to transform Daphne into one of the trees she loves so much **.

84: The beginning of the transformation scene **, crash bang, meditative quiet and muted horns as Daphne unites herself with the earth.

89: The second half of the transformation scene ***, Daphne is mostly silent as she becomes a tree and the orchestra totally takes over to some lovely melodies and fading high strings as Daphne has one last go at wordless coloratura.

Daphne is the most conservative of Strauss’ late operas in terms of the traditional nature of its music. There are traces and reminders of earlier Strauss works particularly Der Rosenkavalier and Elektra, but the score never tries to be atonal or overtly-modern like Die aegyptische Helene or Die Liebe Der Danae. It is probably the closest thing so late in musical history (late-1930s) to a return to mostly late 19th century concepts, which may have been why Strauss’ wife preferred Daphne to all his other operas. The story, such as it is, is basically an uncomplicated love-quadrilateral between Daphne, nature (particularly trees), Leukippos, and Apollo in which neither of the two males ever really has a chance. There are some bizarre elements such as why does Leukippos put on Daphne’s dress for the rites when she rejects the dress and how does she not immediately recognize that it is him, wearing her own dress, when they are dancing?  Apart from the storm interludes and when the two tenors try to get amorous with Daphne the music is almost invariably calm and placid. It was somewhat hard to figure out which star-ratings to give here because the music is mostly of only two kinds, calm and placid or stormy. There isn’t much else to say, A-/B+.