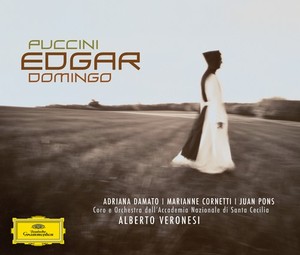 The notorious Edgar is generally considered the worst opera Puccini ever wrote (which is saying something for the composer of La Rondine and Suor Angelica). This review is of the fast-conducted 2006 release with Placido Domingo in the title role. Thus this is of the three act revision from 1892. I’m including the original fourth act because…why not?

PLOT: Flanders, 1302. Edgar is in love with Fidelia (who is ever faithful) but is seduced by her wicked adopted sister obviously named Tigrana (although Fidelia’s biological brother Frank is in love with her for some bizarre reason). Other than their father Gualtiero those are all of the soloists.

0: The opening scene * consists of a nice pleasant mini-prelude and chorus, both gone in two minutes flat and then Fidelia wakes up Edgar by presenting him with a sprig of almond blossoms and a cheery song.

7: Tigrana shows up to her ear-splitting gypsy-sounding theme music * after yet more chorusing. A reprehensible flute putters around until some organ music from the church. Weird strong string music accompanies Edgar’s responds negatively to her desire for all sorts of wickedness. He wants pure Fidelia because she isn’t naughty like Tigrana.  Edgar leaves and Frank comes on lusting after Tigrana but she says “no” to him. Ornery times ensue.

13: Frank’s song about his love for Tigrana has a rather good orchestral accompaniment even if the vocal line is not much *, although his motivations are incredibly trivial to say the least.

17: Chorus heard from church is okay, demonstrating Puccini’s background as a church organist *.

21: Wicked, and even at this early point obnoxious Tigrana comes on mocking those praying. Eventually though her ensemble with the chorus warms up as they take rather good musical revenge on her * but Edgar comes to her defence (for some bizarre reason this causes him to burn down his own house).

25: Frank wants to have Tigrana executed (obviously for rejecting him than for causing Edgar’s bizarre behaviour regarding his house). There is finally a musical climax which will be repeated at the end of the act by the orchestra alone * (this is the best music of the entire act). There is some orchestral angst as Edgar and Frank fight over Tigrana. Edgar wins and flees with her as the people (lead by Frank) curse them.

8: The second (and shorter) half of their duet shows that Puccini’s tendency towards impressionistic music was an early preoccupation *. There are “wrong notes” here. Tigrana is about to win over Edgar’s better nature when suddenly…

11: A troop of soldiers arrives and the couple soon discovers that their leader is Frank of whom Edgar asks forgiveness which is immediately given because Frank is so thankful to him because leaving with Tigrana broke her hold on him. The military tune is catchy if forgettable. Frank decides to offer to return the favour and gives Edgar a position in his troop. Edgar deserts Tigrana and she swears vengeance *.

ACT 3: As in act 1, except obviously for Edgar’s house, a funeral procession in progress. (37 minutes)

0: Between acts Edgar has died in battle. The funeral procession *, is probably the strongest number in the opera. The sequence in itself consists of three parts leading up to Fidelia’s big mourning scene, about ten and half minutes of music in total. First (and best) the orchestral prelude which includes an expanded variation on Edgar’s aria melody in act 2, followed by a choral requiem which allows Puccini to yet again give us some religious-sounding music which quickly goes chromatic in the third part as Fidelia lays a wreath.

10.30: Finally, Fidelia goes into her big mourning scene *. It is sweet and lite, even a bit naive but graceful and the chorus comes in at the end for a big finish and then dying out with monks chanting.

15: Frank praises Edgar as a hero but some mysterious tenor in a monk’s habit (a member of Westboro Baptist Church?) decides to take the opportunity to engage in some dead soldier shaming *. The chorus resists but he has them cursing the dead man in three minutes flat, ironically by using the truth.

19: All that is except for Fidelia who remains true to her name and Edgar’s memory declaring that one day she will see him in heaven (little does she know) *. The music here is almost like an abstract painting but eventually blows up to full-Italianate. There are some good ideas here, but it never solidifies. The crowd leaves and Tigrana comes on.

26: The monk decides with Frank that now that Fidelia has passed the test, now it is Tigrana’s turn. They egg her to denounce Edgar as a wicked and immoral man. She resists at first in a state of utter agitation until the boys try a rather lilting (it tastes like melting butter) orchestral accompaniment *. It is good, but in a sickening way. They then offer her jewelry and she weakens.

31.30: The last five and a half odd minutes * of the opera start off with an agitated chorus calling for arms and the monk gets everyone together so Tigrana can tell them nasty things about Edgar. She gives in and the crowd overturns Edgar’s coffin to reveal, an empty suit of amour?

34: Yeah apparently the monk was Edgar all along (duh) and now that he has his answer and only Fidelia trusted him he reveals his true identity and denounces Tigrana and declares that he will marry Fidelia immediately because of her faithfulness, cursing Tigrana massively to the most barbaric music. Fidelia comes on and is almost instantly  stabbed to death by Tigrana in revenge, who is just as quickly arrested and Edgar and Frank are left devastated by their plan for revenge gone horribly wrong *.

0: Okay, so ignore the last three lines from the return of Fidelia because she ain’t dead yet in this version, in fact the end of the original act three serves in the revision as the fast appendix murder of Fidelia. The original fourth act starts off with five and a half minutes of prelude filler consisting of a rehash of the act one prelude, the Tigrana theme, and then lots of Fidelia and Edgar alternating *.

6: Fidelia comes on wanting to die because without Edgar lives is just not worth living *. The chorus is heard in the background to the prelude music. Daddy Gualtiero comes on looking for her and prays with choral backing to rehashed music from act one. A chorus of women come on worried about Fidelia who responds that she wants to die and goes loco on music that is about as fragmented as her brain. Overall an effective scene.

21: Fidelia passes out just as Edgar and Frank show up and she quickly revives and after everyone else leaves the two lovers embark on a scattered wedding planning duet * which is only broken up when Fidelia gets a bad feeling Tigrana is lurking around (rightly it turns out) although Edgar finds no one. The number starts to turn morbid but ends hopefully romantic enough to salvage the poor thing as Edgar runs off to get everything prepared for the wedding.

32: Fidelia all happy for once, what could possibly go wrong? Well after a few seconds of happy, Tigrana stabs Fidelia, mortally wounding her but no immediate death as this is opera and she has to survive for another five minutes. Fidelia struggles about for a long while as Tigrana complains about how her victims isn’t dead yet while the orchestra meanders chromatically *. Idiot voices come from the chorus until with two minutes left Edgar discovers Fidelia’s rapidly dying self before expiring and Tigrana is arrested, the chorus screams and we get this weird (bum-babaah-bum) sound before the orchestra just explodes on a single chord and it’s mercifully all over at last.

This is one of the worst operas ever, at least by a composer who is as important as Puccini. Ironically there are actually some rather good musical ideas here, it is just that Puccini seems to have rarely bothered to flesh out most of them and when he did he sometimes went too far. Much of the score is pallid, but in the most odd way. Thankfully Puccini did reuse some of the good musical elements here in later operas (particularly Tosca). One is drawn to love Edgar but in the end you really can’t. The plot is not just bad but alas stupid, the pacing even worse, and the character names (especially for the two women) are infantile. The ending is totally obvious (although in the four act version it is much more drawn out as Fidelia spends several miserable minutes after being knifed by Tigrana before finally dying). How either of the two men (Edgar or Frank) could have thought that anything other than Fidelia’s murder would result of tricking Tigrana is beyond any logic as her slaying is the only way that Tigrana can actually accomplish harming the two men in literally a single blow. And yet, I can not help but feel that in parts of the score we do see traces of what Puccini would later write including chromaticism and an almost Debussy-style abstract quality to the music which here just isn’t ripe enough to be pulled off successfully. Whereas Dom Sebastien is called a “funeral in five acts” so could, in three/four acts, Edgar be but when Sebastien is realistic in its fatalism the fatal flaw of Edgar is how unbelievably fatalist it is. The characters, and their actions, are not reasonably human at all and that, attached to a score that is only at best okay can mean nothing but disaster. I tacked on the fourth act just in case anyone was curious, and I think it explains more fully the motivations of the two rather wooden female characters as well as provide for an okay father-daughter sequence, however it really is just postponing the inevitable. Although not the worst opera I’ve ever heard it is a C-.