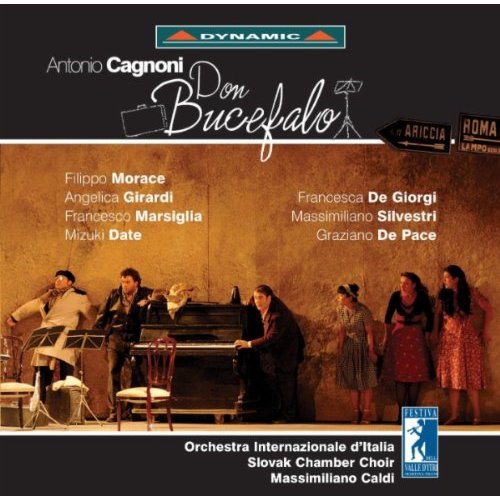 If you were dissatisfied with Cagnoni’s Re Lear here is the opera which caused such a success at Valle d’Itria in 2008 that it encouraged the company to produce that previously never performed drama. This is rather different from the other opera and appears to be heavily derivative of bel canto era comic opera, which was already a recently extinct genre in 1847. This opera, along with Re Lear is available on Amazon Prime Music.

PLOT: Near Naples, Napoleonic era. Don Bucefalo (bass) is a music teacher specializing in voice as well as an opera composer.  Rosa (soprano) is the apparent widow of the soldier Carlino (tenor) and the lover of Count Belprato (another tenor) who she hopes to marry. As the production of Bucefalo’s opera gets underway almost everyone’s plans for the future are foiled, including Agata, a mezzo-soprano friend of Rosa who is jealous of how the soprano gets so much more attention. Another important character is Don Marco (bass) who is both singing the principle bass part in the opera as well as funding the entire enterprise.

ACT 1: A town square with a Cafe, Bucefalo’s and Rosa’s houses visible. (40 minutes)

0: The opening scene ** sounds like a mixture of Bellini and Donizetti at first only to turn heavily Rossini. In itself it is good Italian comic opera music, but if you stand back and thinking you can tell how derivative and unoriginal it is. Basically what happens here is Bucefalo tells the peasants that with his voice lessons their lives would greatly improve.

8: From her house, Rosa, a peasant widow, shares her dreams with us (she wants to become one of Bucefalo’s students and wed the Count). In itself her long aria is fine *.

16: Count Belprato comes on to a rather exotic orchestral accompaniment (flute, oboe, strings) and some rather ardent arioso **.

23: An ensemble follows a recitative establishes the scenario of all of these people coming together to perform in Bucefalo’s opera **, complete with each singer performing trills among other forms of vocal gymnastics. Carlino comes on (in disguise).

32: The eight minute long act finale * consists of essentially a backstage vocal rehearsal in which all of the characters try to mimic the insanity of the famous finales to L’Italiana in Algeri with mad syllabic sounds as Carlino gets mad and wants to shoot someone but also doesn’t want to blow his cover.

37: The last three minutes consist of a lively if standard concerto finale *.

Scene 1: A fenced area in the village.

0: A four and a half minute bit of choral padding in which the men attempt a love song and the women tell them that they can sing it better (and they do). In itself it is okay but it does seem like a silly waste of scenery and has no baring on the story at all. Cute, *.

5: A ten minute sequence in which Bucefalo (alone) goes over female parts (in falsetto) and orchestration *. Of interest for the late usage of a harpsichord and in the last two minutes the orchestra finally comes out for a bit. It is a rare theatrical instance of seeing a composer madly at work plying the craft.

25: The 15 minute second act finale starts off: Rosa obnoxiously complains about how Bucefalo is late for her music lesson. He arrives and they duet mildly. Don Marco arrives and when left alone with Rosa expresses his unwanted passion for her. Carlino eventually shows up asking for lodgings in Rosa’s house. She really doesn’t want to let him rent (and still does not recognize him).  Agata and Giannetta (friend of the two women) show up with the Count and some peasants all looking for Bucefalo. There aren’t any highlights (and everything just flies) until a sweet and mild concertino in which all those on stage express their feelings * : (Rosa worried, the other two women jealous of her, the Count a little suspicious, Carlino really angry with his wife, Bucefalo and Marco feeling everything has just gone totally insane).

27: The last three minutes consist of yet another in which Rosa’s reputation is basically destroyed. Musically it is a bit dramatically stronger than anything else in the act **.

1: After Bucefalo and Marco discuss the production (and Marco volunteers to sing the bass soloist) the first number is a rather sympathetic number from Agata in which she emotes concern over the attention Rosa gets as a soprano and her own lack there of because she is a mezzo-soprano. It is really rather touching and you feel genuine concern for her **.

6: The longest number of the act is a duet between the Count and Rosa in which he reaffirms his love for her. It is somewhat scattered (Rosa) but the Count maintains an ardent line throughout which keeps the number afloat *. Somewhat idiotically Rosa is on the defensive and questions the Count’s faithfulness to her.

Scene 2: The theatre, stage in disarray.

17: Bucefalo addresses the orchestra as they tune up for the performance and then goes off into a Rossini-style basso aria about musical pitch *. It is sort of a continuation of the composition scene in act 2. The chorus congratulates him.

23: The rehearsal of the opera: Apparently set in Ancient Rome in the opening chorus * the males are dressed as soldiers and the women have laurels for them. It is all a bit silly but the chorus itself would actually work in a Verdi opera from about the same time period (Attila is actually referenced here). In the opening recitative Bucefalo has to constantly feed Marco his lines which he warbles around in basso recitative. Bucefalo gets tired of this and asks for Rosa to sing her aria which Carlino decides to use as a moment to take off his fake moustache (I am not joking) and reveal his true identity.

29: Everyone reacts to this shocking turn of events in an a cappella ensemble *.

30: Carlino confronts Rosa who talks (or rather sings) her way out of her husband’s ire *. Bucefalo congratulates her.

32.30: In the last four and a half minutes Rosa expresses her joy over the fact that her husband is not dead and everyone else is ready for the show to go on *.

This is a cute opera, not a very good one, but it has its charms. It is terribly derivative of every major bel canto composer and even has traces of 18th century opera in it. In terms of the story and characters the most positive aspect are the scenes in which Cagnoni tries to make explicit the working methodology of opera composers. The semi-comedic elements just barely work though and the strongest characterization other than Bucefalo is Agata (the ignored mezzo who we really end up sympathizing with). Rosa comes off as obnoxious and rather spoiled, a prima donna without the real life talent but all the fame. Marco mostly just either moves the plot along (producing the opera) or is plain silly (his overtures to Rosa). The two tenors are slightly more interesting: Belprato gets some nice music to sing even if dramatically he is a bit of a wet, Carlino is in all honesty a little too forgiving of Rosa and the fact that she can’t see through his fake moustache disguise is a bit idiotic. There are traces of music that sound much like the weak music of Re Lear, but it never dominates apart from one instance. This opera does come off more effectively in that Cagnoni’s music even at its worst is good enough for lite romantic comedy so unlike Lear this opera is actually believable, even if it lacks any golden moments. B-.