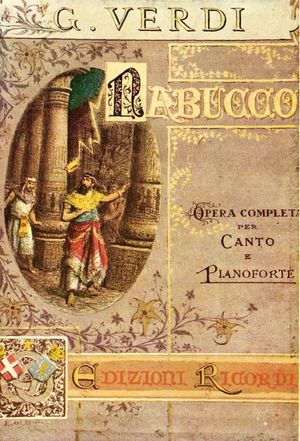 With this review all Verdi operas have been covered by either Sir Denis Forman in “A Night at the Opera” or myself. Videos of this opera can range from 111 to 147 minutes, which I believe is due to conducting speed. I chose this one because it was a live performance and I’ve been sending off audio recordings lately. This was Verdi’s third opera, first real hit, and it almost was never written as most know.

PLOT: Jerusalem and Babylon, 587 B.C.(E). King Nabucco takes Jerusalem after they kidnap his daughter Fenena as their hostage. She is freed by Prince Ismael (her sort of lover?) which ticks off the High Priest Zaccaria. Meanwhile, Nabucco’s other daughter Abigaile finds out that she isn’t his daughter after all and steals power after he is struck down by the Almighty for blasphemy. The last two acts consist of Nabucco regaining power, rescuing Fenena and the other Jews (she converts) from Abigaile’s proto-pogrom which she starts to please her supporters, in particular the High Priest of Baal.

0: The overture ** is one of Verdi’s most memorable. “Va Pensiero” comes in right after some regal goings on and then there is a rather exciting galop. I personally love the effect of timing the cymbals and timpani in unison, Verdi would never do this again.

ACT 1: The interior of the Jerusalem Temple, the city under siege. (38.5 minutes including the overture).

8: The chorus of terrified Israelites ***. First in unison, then the men, followed by the women (to harp accompaniment).

12: Zaccaria comes on and tells them that they got Nabucco’s daughter captive and will use her to buy the lifting of the siege **.

17: Ismael rushes in telling everyone that Nabucco seems to be getting even closer. Zaccaria entrusts Fenena to him (bad idea). He leads the Israelites in a rather tuneful prayer ** before they all go out to continue the fight.

23: With the two alone, we get some backstory. Now miserable Fenena rescued Ismael from a Babylonian prison when her father had him imprisoned years ago when he was the Jewish ambassador and they fell in love in spite of the fact that her sister Abigaile lusts after him. Suddenly Abigaile and some soldiers enter the Temple in disguise and she comes upon the pair. A trio ** ensues in which Abigaile tries one final time to seduce Ismael (doesn’t work of course) and she swears revenge because she knows that her rival is Fenena.

26: Frightened Hebrews pour into the temple franticly *. They have been betrayed!

28: Abigail declares the Temple in the name of Nabucco. Ismael reveals that she has gotten in by disguise and Nabucco is announced as momentarily arriving. The Hebrews wait in fear to an entr’acte of Babylonian military music *.

31: Immediately upon arrival, Zaccaria pulls a knife on Fenena and is about to stab if Nabucco and his men don’t get out now, he at first relents *.

32: His theme is taken up by the other principles and the chorus **. Abigaile wants blood, but three minutes later Ismael saves Fenena and tells Zaccaria to cool off.

35: With Fenena safe, Nabucco goes about rounding up the Hebrews and sacking the Temple amid curses on Ismael from the Levites, screams for revenge from Abigaile (as usual) and feelings of helplessness from the lovers. The finale goes from climax to climax  as total destruction is waged in the most operatic way ***.

Scene 1: A gallery in the royal palace in Babylon. (29 minutes)

4: After some sinister search music Abigaile comes on with a parchment (would not have existed 2500 years ago) which proves that she is not Nabucco’s daughter but the product of an adulterous affair between one of his many wives and a slave. She greets this news with thoughts of her earlier days in an ironically sweet coloratura aria *.

8: The High Priest of Baal arrives telling her that Fenena can be overthrown as regent (Nabucco is away at war and has left F in charge), but Abigaile can seize power and the priests will spread the word that Nabucco and Fenena are both dead leaving Abigaile as Queen regnant. Abigaile greets this news with a powerful cavatina con coro to a very catchy militant melody **.

Scene 2: Another room in the palace (in some productions the same).

11: Finally we actually slow down for a change with a long aria from Zaccaria as he orders a Levite to fetch the scrolls needed to complete a conversion (Fenena is converting to Judaism) although we will not know this exactly for another eight minutes or so when Zaccaria’s sister Anna delivers her only solo lines. Much of this aria is orchestrated only for lower strings (viola and cello) *. It is good but never exciting at all.

17: A group of Levites comes to confront Ismael (most like to kill him or at least curse him again). Ismael responds to their scary revenge chorus (you heard it in the overture and the act 1 finale) with a rather powerful but lilting tenor line amid an orchestral crescendo **.

19: Anna stops the show with her line, Fenena has converted, it’s okay now! Zaccharia tells everyone to get happy but it is short lived as Nabucco’s captain Abdallo arrives with the crown declaring that Nabucco has been killed in battle and in forms Fenena that the High Priest of Baal is coming with Abigaile to take power. The enemies arrive and Abigaile screams for the crown but Fenena would rather die than give it to her, Nabucco stops everyone by arriving, alive *. (This all occurs very fast).

21: Nabucco and all the other characters react to how quickly all these things have happened **.

25: In the last part of the finale ** Nabucco decides that in order to prove everyone’s loyalty he wants to be declared a god. Zaccaria warns that God will punish him and only the priests are really into this. He tries to force Fenena to worship him (she confesses to him that she has converted to Judaism and can not do such a thing). He declares himself to be god and is struck down, he goes mad for four minutes until passing out in Fenena’s arms obviously insane. Zaccaria tells them all that this is the work of the True God, but Abigaile still thinks that ultimately, the followers of Baal will win.

1: The Babylonians hail Abigaile as their queen in a jovial chorus **. The opening to the scene consists of the Babylonian military theme from act 1. The High Priest wants Abigaile to fulfill her part of the bargain with ordering the porto-shaol. Abdallo tries to stop Nabucco.

6: After Abigaile orders her people out she tricks Nabucco into signing the execution order for Fenena and the other Jewish people in the city *. She gets the signature to the most beguiling little woodwind tune. Nabucco has instant regret when he realizes that Fenena will be among those executed. Then Abigaile brings in the big guns and tells him that he has another daughter, her, but Nabucco immediately tells her that she is a slave and Abigaile takes on the parchment and tares it apart.

10: Nabucco then tries to appeal to Abigaile about fathers and daughters and such but she isn’t buying it at all *.

13: Nabucco appeals to her one last time to a sweet but noble melody as she orders her guards to take him back to solitary and the scene ends with her saying no to him as she leaves **.

Scene 2: On the banks of the Euphrates.

17: The moment you have all been waiting for has arrived: Va Pensiero *** the chorus of Hebrews in captivity in Babylon. It flies like on eagle’s wings, no further comment needed.

22: Zaccaria comes on for about three and a half minutes and gives them are furious pep talk prophecy: God will deliver His people and will use Nabucco to do it! **.

Scene 1: Nabucco’s chambers in the palace.

0: The prelude to this act consists of multiple themes moved around in succession: Sinister music then a remembrance of the noble father theme from act 3 scene 1, then Babylonian military theme, the scary theme. Nabucco wakes with the funeral march *. Sanity is starting to come back.

5: Nabucco prays to the Hebrew God ** asking for strength to save his daughter Fenena and the Israelites.

9: Abdallo and the loyal guards arrive ready to free the King. Nabucco asks Abdallo for his sword, they will rescue Fenena and stop the mass execution *.

Scene 2: The place of execution, an idol of Baal prominent.

11: The Hebrews are brought in to the funeral march played by the off-stage orchestra *. Fenena is to be executed first on the order of Abigaile.

14: Zaccaria tells Fenena to have courage but this isn’t needed as she is filled with hope in God and delivers are prayer ***.

17: Nabucco arrives and saves Fenena reminding the execution order and the idol of Baal is destroyed. Everyone joins in an a cappella song of thanksgiving ***.

19: Nabucco spots Abigaile who reveals that she has poisoned herself and is near death. She and Fenena embrace and prays for the mercy of God to forgive her. She dies reconciled to Nabucco who Zaccaria declares the greatest of kings ***.

Musically this is an almost perfect opera, not quite, but very close. Verdi’s amazing gift of melody is on display for the first time here and although it would be repeated in Ernani shortly afterwards it would not be for another seven years (Luisa Miller) that Verdi’s craft would be consummate. As interesting as it may seem to us today it was not Va pensiero that was encored at the premiere but in fact the act four a cappella Immenso Ieovah. The opera can be faulted for moving far too quickly (each act becomes progressively shorter). Most of the relationships in the opera  are never fully fleshed out particularly Ismaele and Fenena who are essentially out of the picture after act two until they are being led to the block in the finale. The relationship between Nabucco himself and Abdallo is another as there are hints of a father-son bond between them. All of this pales though in the face of Verdi’s melodic score. The chorus is often stronger than some of the characters, in fact it is its own character contributing as much as any of the soloists do to the plot foreshadowing later Verdi. An A.