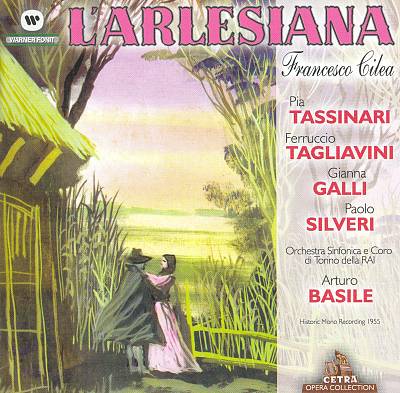 Opera in three acts. Running Time: 1 hour 30 minutes. Most opera goers know Cilea’s much more famous 1902 Adriana Lecouvreur and if that is a “soprano opera” then this is a “tenor opera”. I am afraid, however, that the strengths and weaknesses of the later work factor also in this earlier opera. This opera exists in four difference revisions, this is probably the last one from the 1930s when Cilea seemed to think that shortening his operas would make them more accessible. I dunno His last opera Gloria was revised at about the same time and was cut by some 20 minutes, it was even more of a flop than it was when it premiered in 1907.

PLOT: Southern France, mid to late 19th century. Federico is in love with the title girl from Arles only to discover that she is two-timing him with a drifter who has two letters to back up his story. His mother tries to get Vivetta, a girl friend of his, to seduce him. It doesn’t work.

0: The prelude *, a late (1937) addition to the score. It starts off brooding and ends in sheer tragedy.

6: The shepherd Baldassarre tells Federico’s younger (mezzo-soprano) and slightly retarded brother L’Innocente a story about a goat which fought a wolf throughout a single night only to die from exhaustion the next morning at dawn. Much of this is to very welcomingly calm music *.

13: Rosa, the mother, comes waiting for Federico to return. She is worried about this whole thing about the girl from Arles and has asked her brother Marco to investigate her. She emotes before the arrival of Vivetta. Her song is sweet if a little dim *. The only plot point between now and Federico’s arrival is that L’Innocente somehow ends up climbing up to the hayloft (which is very dangerous) and Rosa screams and orders him down from there. He is recovered safely. Rosa has yet another “thinks” arioso which floats around in the strings for a while.

18: Federico arrives at last, there is some action with the horns and some craziness as he fantasizes about that girl from Arles *. Rosa is worried and with good reason. Vivetta freaks out, Baldassarre comments, a chorus of peasants arrive with a rather standard “Evviva” chorus announcing the arrival of Uncle Marco, who is apparently the area’s primary landowner. This and the following conversations which forward the plot in recitative and expose the girl from Arles are the musical low point of the act.

28: Federico has a rather lovely drinking song in honour of the girl **. This is the best music in the entire act which ends with hysterics from Federico as Metifio the drifter’s letters to and from the girl are shown to him.

0: Furious music leads to Rosa and Vivetta discussing how the latter must seduce Federico out of his Arlesiana fixation. The music here is mostly ornery from Rosa with some bright spots coming from Vivetta’s soprano line *. The two women go off and Baldassarre and L’Innocente come on, the latter hungry. Apparently only Baldassarre actually looks after this kid although his mother provides the flighting moment of interest in him.

6: The two find Federico who emotes *.

8: Baldassarre tells him to forget the girl by helping him work *. After some dialogue between the two men there is a dim little country chorus.

13: Federico has another fury bit where he curses the girl but L’Innocente puts an end to this by paraphrasing Baldassarre’s story about the goat and the wolf  and then falling asleep and Federico gets some sort of inspiration from all this as he goes over the letters and reflects on how much pain the girl has inflicted upon him. Suddenly the music changes gears and becomes much more rich **. The high point of the opera.

20: Vivetta’s attempts at seduction come to little success. It is cute, it is flowery, it is so low temp for a long while until she finally gets one great go at admitting genuine passion **. Federico rejects her advances and Rosa has to come on the scene and consent to Federico’s proposed marriage to the girl. He refuses and knows that only Vivetta can help him forget.

23: Vivetta has a sweet song **. One can truly feel empathy for her here.

26: There are three brief patches of sweet orchestration when Federico and Vivetta are singing that are worth mentioning before the act ends *.

{There is supposed to be an orchestral Intermezzo at this point depicted a Saint’s Day festival, actually it is more depressing sounding emotive music like the prelude in the first half and then three minutes of festive music. Apparently in this revision of the opera Cilea decided to drop it. It exists in several versions from 3 to 7 minutes. I’ll give it a star * for those of you who can find it.}

4: There is some okay female chorusing with Baldassarre as wedding preparations are being made but nothing worth mentioning beyond that until Federico and Vivetta come on with some richly orchestrated love duet music **.

10: Metifio returns for his letters, Baldassarre tells him that he has already sent them back to Metifio’s father. Vivetta has a calming little bit before Federico overhears that Metifio plans on kidnapping the girl from Arles and an unholy terror breaks loose as the two men attack each other than Vivetta screams for mercy **. There is something oddly yet attractively old fashioned about the music here, even as Federico attacks Metifio with a sledgehammer. Rosa and Baldassarre separate the two men. After some orchestra scuffle the chorus does its nut off-stage.

16: Rosa’s prayer about how motherhood is literally hell * after the chattering of the chorus. L’Innocente interrupts her because he can’t sleep and wants to watch his brother so his mother can sleep. She sends him off to bed with a kiss on the forehead. This is nice but their relationship has never really come off that well and the music is just okay. Interlude music follows.

27: The final scene **: Federico comes on in fantasy mode, can’t stop thinking about how the girl is being kidnapped by Metifio at that very moment. He keeps thinking about that story about the goat and the wolf. He climbs up to the hayloft, Rosa and Vivetta come on trying to stop him and he jumps. The two women are desolated.

This is a mixed-bag. Federico and Vivetta get some nice sweet sounding music but if Vivetta is the only one for whom the audience has true empathy, only Federico has any dramatic power here. Baldassarre might be worth while as an acting part, but Cilea doesn’t give him much music of note. L’Innocente is almost an operatic cliche and Rosa is a dominating mother to one son and neglectful to the other so she isn’t all that sympathetic. There is something dreadfully old fashioned about the music during the confrontation scene in act 3 between Metifio and Federico. As I said about Adriana Lecouvreur, this opera suffers like basically everything else Cilea ever wrote by having wonderful orchestration but musically it is stretched very thin in terms of inspiration. Most of the music is just okay so that the few highlights: the drinking song, Federico’s famous Lament and the failed seduction scene, the loverly music, confrontation scene, and the finale leave one wanting more. Also Federico is a bit of a pill and you feel really sorry for Vivetta. It’s a B- at best.